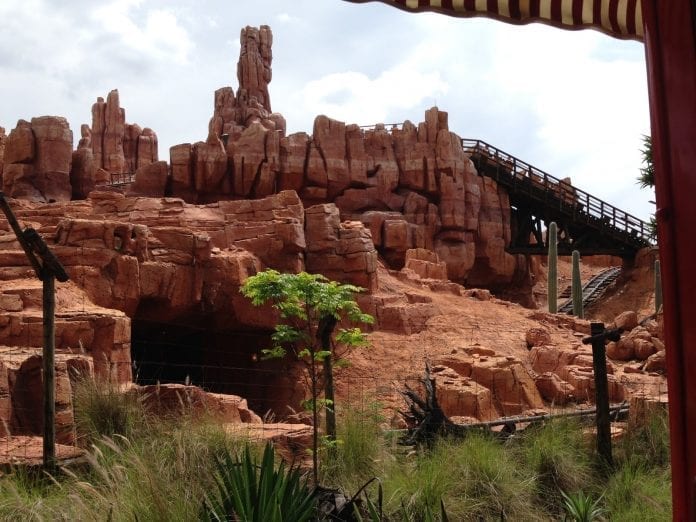 The Story of Being Chosen as “First Riders”

Every once in a while a simple day in the parks turns into something that you’ll never forget. Sometimes it’s the simplest details that make the biggest difference, but other times it’s the unexpected that truly creates a lasting impression. On one particular occasion, a moment extraordinarily surprising created a memory for my family that will last forever. Quite a few years ago, long before fastpass+ and online booking systems, we entered the Magic Kingdom on an early entry day and planned on riding as much as we could before the crowds filled in for the morning. The day started out great and we got to experience a variety of attractions with virtually no wait. However, as many of you may know, not all of the attractions open for early entry. On this particular day, Thunder Mountain and Splash Mountain didn’t open until the park officially opened for non-resort guests. So, since we had finished about all we wanted to accomplish of the attractions that were already open, we went on around to the back side of Fantasyland that leads into Liberty Square in order to wait for that portion of the park to open (when the main park opens, a rope blocking off the area is removed and the rest of the area is opened for the day). Thankfully, we were near the front of the pack and were happy that we may be able to walk on to both Thunder Mountain and Splash Mountain. Little did we know, minutes later we would be finished riding both attractions and one of them twice!

As the rope was removed and the crowds slowly made their way over to the two main attractions, cast members led the way to help manage the crowds (as they usually do). Unfortunately, a few rowdy guests decided to charge ahead and ignore the patient requests of the cast members. After all, they can only do so much with a crowd of people trailing behind them. However, that’s when things made an interesting change.

The cast member directly in front of us turned around and quietly whispered, “Would you like to be the first riders?” At first, we didn’t really understand, but we went along with it anyway and the cast member (who’s name I wish I could remember) simply said, “follow me”. So, we went ahead and followed along and off we went to the attraction. Once we got to Thunder Mountain, after leaving most of the crowd behind due to the fast pace at which we were ushered along, she proceeded to lead us through the exit onto the attraction. Once we got there, in a state of confusion, the other cast members pointed to an empty train and said pick your favorite row. We headed to the last row and off we went as the only people aboard the train.

To be completely honest, it was a strange experience to be on the attraction all by yourself. As you travel around the tracks you hear things and experience things that you don’t always pick up on when there’s a train full of excited guests. It was undoubtedly a unique experience.

As we arrived back at the station we were met with an array of expressions as the train pulled in and guests lined the queue. Half were confused, the other half were irritated and they all asked the same question, “how did they get here before us?”

As we went to disembark, the same cast member came over and told us not to get up. She simply closed the lap bar and off we went again, this time with a train full of passengers. After that second ride, we expected the exciting morning to be complete, but the same friendly face was waiting for us when we returned to the station. This time, all she asked was if we liked Splash Mountain.

As you can imagine, we said “yes”, and she pointed to a guy at the end of the exit and said follow him. So, off we went and to our surprise the same process played out over at Splash Mountain. When we finished up there, they basically wished us a great rest of the day in the park and as you can imagine our day was made.

It was an incredible experience to say the least! We never thought it could happen, never expected it to happen, and now it’s one of our many wonderful memories of Walt Disney World. It’s something we’ll absolutely never forget. Now, I’ve been to Disney probably hundreds of times, and I’ve only seen or experienced this happening once and to be honest, I don’t see it happening again any time soon. However, it was just one of those things that you’ll only ever experience at Disney. No other theme park would go out of their way to make a guest feel so special, no matter how simple the experience they provided may be.

Disney may not get everything right, but the guest experience and the unexpected events that have become synonymous with Disney are something that will hopefully never change. To be honest, I don’t know if this happens every day, once a year, or we just happened to be in the right place at the right time for a memory of a lifetime, but always expect the unexpected from Walt Disney World. It’s hard not to think that’s what Walt Disney wanted every single guest to experience at some point throughout there time in a place only he could have imagined.