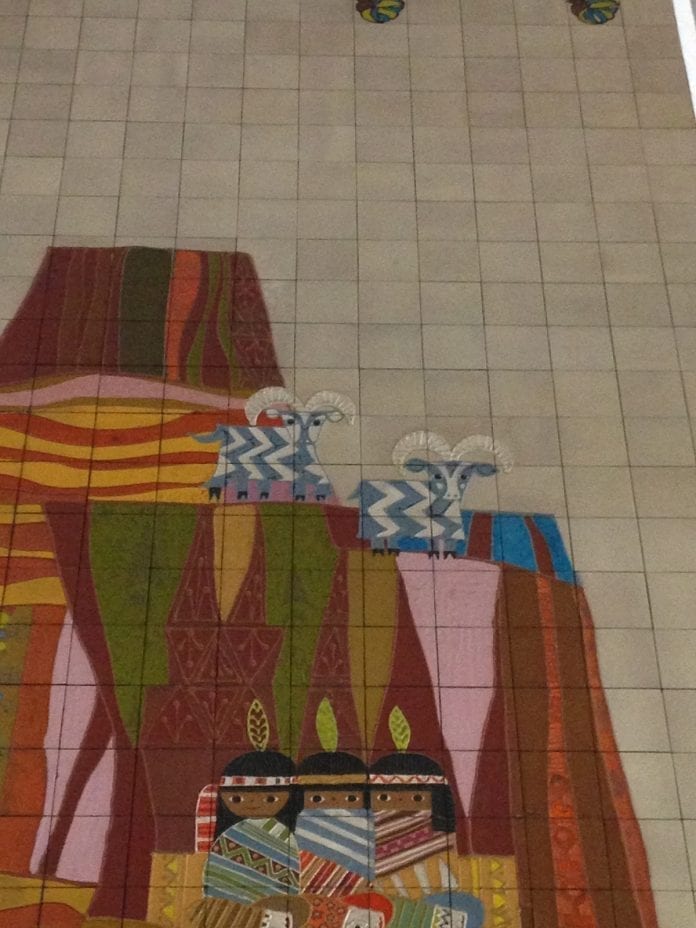 “Hidden Disney”: The 5 Legged Goat at the Contemporary Resort

While Disney is full of simple secrets and hidden gems, some are more obvious that others. One you may or may not have noticed is clearly visible when you know what to look for.

High in the Contemporary’s Grand Canyon Concourse is a 5 legged goat with an interesting yet simple story. The goat itself is a piece of a very large mural which covers the area housing the elevators used to reach the various guest rooms of the resort. Near the top of this piece of art, on the side facing the monorail, you can find the 5 legged goat (see picture below). The mural itself was created by the famous Disney artist Mary Blair. While not everyone will recognize that name, you will certainly recognize the productions that have been largely developed as a result of her creativity. Mary Blair played a significant role in the creation of such well known films as “Song of the South”, “Cinderella”, “Peter Pan”, and “Alice in Wonderland”. Beyond the films, her artwork inspired one of the most well known attractions in Disney history, “it’s a small world” (Yes, it is intended to be all lowercase despite being a name. While it is not known for sure, it is assumed that it is an intentional play on words). As you can imagine, for those who follow Disney history, this tends to be one of the crown jewels of Disney Parks artwork.

However, that’s not quite the entirety of the story. As many of you are probably wondering, “Why does it have 5 legs?” According to “legend”, Mary Blair decided that no piece of artwork could be perfect, because only God was perfect. As a result, it has never been changed and despite what many believe, it did not occur simply by accident.

So, next time you’re eating dinner, shopping, or simply passing through the Contemporary on the monorail, be sure to take a look high above you to find this simple, yet interesting detail that so many guests simply overlook.

Have you heard of the 5 Legged Goat? Did you know the backstory?
If you enjoyed this article, be sure to SHARE it with friends and follow our site through google plus with the button on the right -> or by adding your email address in the box! Thanks!