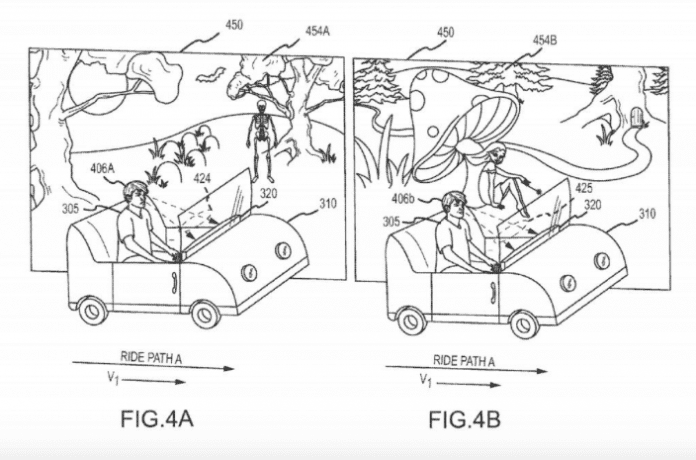 
Just this morning, a new patent has been released to the public for a new technology that could be coming to the Disney parks. While this is just a patent and no official plans for its use in an attraction has debuted, it certainly is an interesting concept. Disney describes the patent as “Sensing and Managing Vehicle Behavior Based on Occupant Awareness.” In typical terms, this potential attraction application is essentially a way in which Disney could monitor the reactions of guests in ride vehicles and adjust the experience accordingly for the individual guest. In order to do so, it would require that the given attraction using the technology employee facial recognition software and a database of preferences chosen by the individual (Assumably in combination with MagicBands or other guest recognition software).

For instance, if a guest has a sensitivity to motion sickness, a set of pre-ride questions would indicate that issue to the system and it could react accordingly to deliver a personalized on-ride experience for that particular guest/guests. While this would be similar to the difference between green and orange missions on the current version of Mission Space, it would vary drastically in regards to the individual guest preferences. Rather that simply choosing one or the other (in the given example that may or may not use this technology in the future), the attraction would respond to the guest “emotions” and alter the ride immediately.


The patent even goes as far as to explain that the technology could create the ability to adjust even the climate of the ride vehicle based on the occupants comfort levels automatically. For example, if a ride vehicle’s temperature is rising, the system could adjust the experience to accommodate the guest automatically.


While this would be a huge step for Imagineering in creating a one-of-a-kind experience for every single guest, I could certainly see the downfalls of the technology. One, it could be too personal for many guests. Two, what if the system malfunctions and you end up in a much more thrill-based experience that you intended. Last, how would an attraction develop an “identity?” When we go to the parks, we expect a certain experience from certain rides, and while it would be nice to see those changes on each ride, it would also remove elements we’ve come to expect from that attraction experience.


Something else also came to mind when this story debuted. Last time Disney filed a major patent (the drone patent), the show debuted very quickly after it’s patent filing approval. As a result, this certainly makes me wonder if an element of this technology could be coming to Pandora when it debuts? Again, I don’t know anything for sure in regards to that speculation, but Imagineering has been parading the “new technology” banner for Pandora and this would certainly be a way in which Disney could make the new experiences accessible for a variety of different guests.

So, what do YOU think? We’d love to here your thoughts! Tweet us (@guide4disney) or respond to our post on Facebook to tell us your thoughts on the technology! As always, do us a huge favor and SHARE this post with friends to bring them into this growing Disney community!