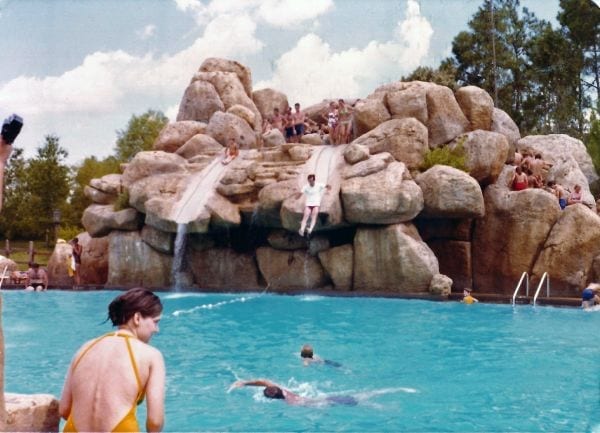 by: guide4wdw – Collin
Throughout the extensive history of the Disney parks and resorts, certain elements of the “Disney Experience” have changed or developed into completely new concepts over time. However, in a few exceedingly rare cases, Disney essentially gives up on an idea or simply abandons a development. For those of you who have been following along with the site, you may remember an article I wrote called:The Forgotten Walt Disney World Resorts That Could Have Changed Everything. That particular article focuses on many of the resorts that Disney has abandoned concepts for or actual structures of over the years. Sadly, Disney also abandoned one particular theme park along the way! That park, which is the topic of our conversation today, was known as Disney’s River Country! Many of you who have grown up in the Disney realm may distinctly remember this particular park. For nearly every guest who experienced it, just stating the name brings back memories of joy and exploration from their time in the park. River Country grew from being simply Disney’s first water park into a legend in the world of Disney history. It had an iconic status among guests, and the concept itself seemed to bring families together in a way that was simple, nostalgic, and themed while remaining rustic at the very same time.


The water park, which debuted in 1976, thrilled guests of all ages with Slippery Slide Falls, Barrel Bridge, White Water Rapids, Bay Cove, and many other attractions. Perhaps the most famous aspect of the experience was it’s “connection” to Bay Lake. As you can imagine, the arrangement caused many problems (which we’ll get to later on), but it also added to the experience of being surrounded by nature at a good ole fashioned swimming hole. The River Country experience wasn’t about the newest technology or the greatest new invention but rather an old fashion, family friendly, form of entertainment. Unfortunately, in the early 80’s Disney faced a strange concern, amoeba that caused deadly infections. The infection, which has been found across the state of Florida along with other particular states can affect those who swim in warm natural bodies of water. Despite the rising concerns, Disney kept the park open after a young boy supposedly died of the infection claiming that it was contracted at River County. There was certainly no way to prove the link and Disney kept the park open for years after the incident.


Soon after this problem, Disney developed it’s second (Typhoon Lagoon: 1989) and third (Blizzard Beach: 1995) water parks which are still around today. River Country remained popular despite the competition of the sister properties, but faced it’s largest concern in the time following the September 11th attacks.


After 9/11, as many of you well know, tourism dropped significantly and even caused brief closures of some of Disney’s most popular resorts. After a fairly successful season at River country in 2001, despite the loss of tourism, the park did not return to operation the following year. The last comment released to press about the experience that year was that it would reopen if the guest demand was high enough. To this day, the park remains closed and essentially abandoned after over 15 years.


Speculation about it’s closure arises constantly, but a few more reputable claims have developed over the years. The first of the more interesting claims believe that when Florida  developed a law that all water park attractions must be chlorinated, the filtration system for the lake water could not be modified to meet the regulations. The other major claim is that the amoeba problem in the lake was far more severe that originally expected.


No matter what the actual case of it’s closure may have been, perhaps the greatest element of River Country’s expansive past is that upon closure, the area was not destroyed, but rather untouched and abandoned for years on end. Even today, the park remains largely untouched with the exception of the natural destruciton of the attractions over time.

The only publicly known statement about the park in recent years was that the deep water pool, seen in the images above, was being filled in with concrete in 2016. The change many believe was sparked by the growing mosquito concern in central and southern Florida, as well as the Alligator incident which recently made the news and affected many aspects of the Disney parks.


While many, or quite possibly all, of these claims could be true, the park remains ultimately untouched. As far as we know, Disney has no plans to bring the park back, and would likely never even attempt to do so, personally I would love to see it reemerge with the rumored expansion of Fort Wilderness to include DVC. A recreation of the project, perhaps with a concrete “lagoon” rather that the lake spill over would make for a legendary pool in the case of a DVC expansion. Of course, that’s all wishful thinking, but as with many things Disney develops over the years, a good idea never truly gets forgotten.

Here’s a closer look at River Country in it’s prime in 1977 as a part of a Wonderful World of Disney episode where the Mouseketeers visit Walt Disney World!

River Country has a rich history, but that history wouldn’t be complete without mentioning the trespassing that has occurred onto the abandoned property over the years. Before continuing I must say that you should never try this yourself and I have never personally been anywhere near River Country. Doing so can in fact get you banned for life from all Disney parks and resorts and could be extremely dangerous.


With the parks location (surprisingly close to Fort Wilderness), it is quite easy to get to the abandoned site and very few attempts were made to cover up it’s existence for many years. Over time, guests of all ages scaled the fences and got an up close and personal look at River Country long after it’s closure. To the surprise of many, the park was nearly untouched. Pictures of cast members and guests were still in many buildings, files were still there from the parks days of operation, and the entire layout remained largely unchanged. It was nearly identical to it’s closing state in 2001 with the exception of grown up shrubbery. While many who explored the abandoned property faced strict consequences, others shared that content across the web and much of it can be viewed online today. Enjoy their videos but never try to recreate them yourself. Personally, not having toured River Country during it’s prime is one of the very few regrets I have about the Disney parks. Of course, even at the time of it’s closing in 2001, I was only 5 years old and likely would have never remembered it even if I would have experienced it first hand. At that point, water parks weren’t a part of our Disney experience, and that could have been the case for many families considering it’s closure.


River Country is one of those things that is distinctly Disney, but no longer really Disney at all. It has a rich history and an elaborate story to tell, but the experience will likely never return. However, the memories and experiences shared by families there will live on for generations!

Thanks for reading and be sure to SHARE this article with friends! We truly appreciate your support!

Collin Kendall - March 11, 2020
Comparing Disneyland vs. Disney World is a tough thing to do. You have to consider the food, size, costs, and resorts, but it's just a different experience!