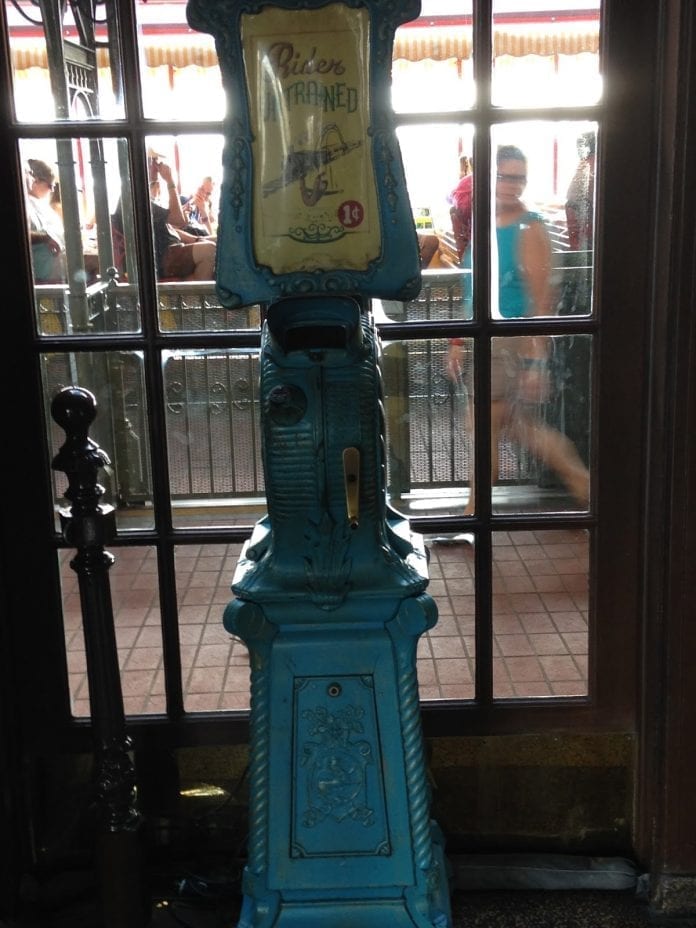 Long before the days of the giant Emporium store we recognize today as a continuing portion of one full side of Main Street U.S.A, the experience was divided into many much smaller locations.

As quite a few of the nostalgic Disney fans may recognize, the Penny Arcade was a huge part of the Main Street experience for many years. Guests clamored to the lights and sounds of the antique games being played, but unfortunately, on March 19, 1995, Disney decided to permanently shut the doors on this day one experience.

The arcade certainly had an outstanding 24 year run, but by looking back at the experience you can really appreciate the details that made the experience so special for guests of all ages. The location, which debuted on October 1st, 1971, was one of those distinctly simple Disney parks creations that developed memories for guests of all ages no matter how simple it really was. Some loose change could buy you entertainment for quite some time, and even in 1971, many of these games were exciting to witness first hand. Many guests had never seen, and much less tried a Mute-o-Scope, a PianoOrchestra, a classic football/baseball game, or even a Cail-o-Scope from the early 1900’s. These games were one of kind and largely remain that way today (we’ll explain how on down below).

The Mute-O-Scopes have entertained guest for years on end. Essentially, these “games” allowed guests to look into a machine through a viewfinder and turn a crank in order to watch a silent movie (similar to a flip book). After trying this for myself, I have to say that even today it is quite an intriguing experience. The slides on the “stage” rotate at the same pace as you crank the machine and the story unfolds before your very eyes. It’s a multi sensory experience that is hard to explain. As a classic cartoon or “film” unfolds before your very eyes and the quiet ticking of the slides rolling over is audibly heard, a memory develops that’s hard to forget. Years later, improving on the invention of the Mute-O-Scope, the Cali-o-Scope took over with a simple, guest assisting addition. Instead of cranking over the slides by hand, the machine did it for you! Of course, these aren’t revolutionary concepts today (quite the opposite), but the experience brought a sense of authenticity and nostalgia to the early days of Main Street U.S.A. The Disneyland resort still features a small Penny Arcade, but it’s days in Walt Disney World are essentially over. However, you can still find what’s left o the Penny Arcade machines scattered around Disney property.

Many of the games can be found in the Main Street Station, a short ways away from their original location. Sadly, many of the machines are no longer operational, and have been placed that way by Disney intentionally. Of course, many of the more popular offerings including a fortune teller have never reappeared, despite being guest favorites. Surprisingly, a select few variations of these arcade game concepts have popped up over at Disney’s Boardwalk Resort. After visiting the resort multiple times, I stumbled into one of the antique games while walking out of the resorts main lobby (as you head in the direction of Epcot). Just on the left hand side of the walkway as you walk towards the bathrooms of the lobby, you’ll find two nearly original (possible reproduction) Mute-o-Scopes that are in functioning order! Today, the machines are there to use free of charge and provide another little hidden gem for the Boardwalk Resort (As of December of 2016 I believe they were playing a classic Mickey cartoon)!

As you can see, the unfortunate closing of the Penny Arcade led to some small changes, but over time these new locations developed into an aspect of the park many of us love today, the expanded Emporium. In the arcades pre-1995 location, the Penny Arcade held a special place behind the Tobacconist and the House of Magic.  Of course, these two locations also eventually faded away when the push away from the small, independent stores began in the Disney parks. You can catch a glimpse of the Penny Arcade in it’s original state at the 8:55 minute mark in the following video: