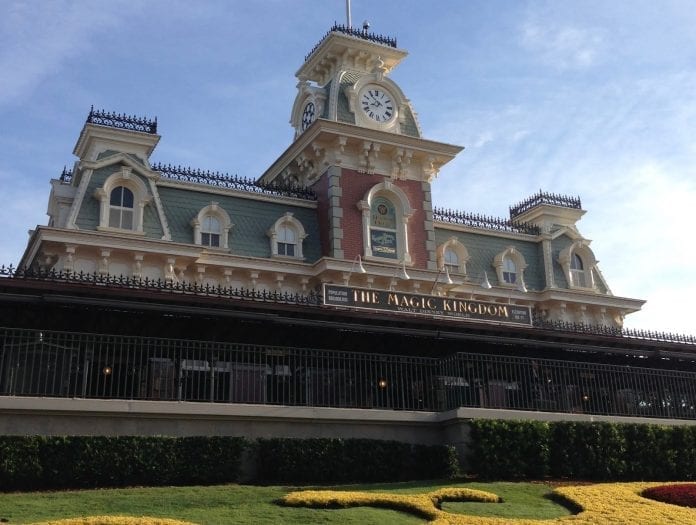 How Disney “Sets the Scene” On Main Street U.S.A – A Closer Look

by: guide4wdw – Collin
twitter: @guide4disney
instagram: @guide4disney
Without a doubt, many of you have walked down Main Street U.S.A. time and time again, but did you know that the Main Street experience sets the stage for your time in the park by developing a better guest experience without you ever recognizing it? Without a doubt, today’s Main Street is a far cry from its original, 1971 state, but a few things have remained largely the same along the way. Today, the park still “sets the scene” for the Magic Kingdom experience the same way it did in ’71.
As you walk up to the gates of the park, you’ll notice a few distinct elements of the experience right away if you step back and take a look with a new perspective. First, glance down at the concrete beneath your feet. The pathway is mostly red as you approach the Main Street station after passing through the turnstiles. Many believe that Walt did this to roll out the red carpet for the guests, but in reality it served an additional purpose that often gets overlooked.
In the development of the facade for the street, Imagineering made a special effort to utilize the backdrop at hand. In Florida, they were working with a much brighter natural background that what they had experienced in developing Disneyland. As a result the colors vary subtly between the two parks. Of course, the overall design features similar elements across both parks, but they feature a distinctly different color pattern which many guests don’t recognize.
However, there’s one main characteristic that carries over across all the Disney Parks, Main Street Station. For many, Main Street is a gateway to the joys of a day in Magic Kingdom, but when you think about it, the station develops an element of the “Disney Experience” for each and every guest, the Cinderella’s castle reveal.
The station itself is the only full scale building on Main Street and is designed to act as a curtain to hide the big story reveal that the director, Walt Disney, has developed. Without the scale of the building, the effect of the grand castle reveal would be lost, and the feelings invoked would never be the same. In addition, the Main Street experience is affected by subtle changes that transform the guests interaction despite going nearly unnoticed. For example, as you enter the park, along the right hand side you’ll find necessities that you may have forgotten and need for your day in the park (ex: sunscreen, hats, sunglasses, etc). Of course not all guests follow this path into the park, but these necessities lie along the right hand side as a result of a majority of the population being right handed (an ingenious business decision). In a similar way, food and snacks that guests use to fuel up for their day lie along the right hand side of the walkway. At the end of the day, it’s natural to follow the opposite path out of the park as you are returning from the other direction. So, Disney naturally placed a majority of the shopping (even before the Emporium stretched the length of the street) as you exit the park.
You see, the park sets the stage for a natural guest experience. While from a business perspective, this is quite clever, it also benefits the majority of guests as they tour the park. Everything is where you would want it to be and it really adds to that feeling of being “at home” in the park.
Disney sets the stage for every guest in the way of their interaction with the park, but the overall experience is like going to a grand movie theatre to witness an on screen production (Walt’s specialty!). The station is your curtain, the popcorn is right inside the door, and the film itself is your families Walt Disney World experience driven by the stories played out in the attractions and elements you experience in the parks.
If you liked this article, be sure to check out our other posts in the history section of the site above! As always, please share this post with friends and invite them to join this Disney community!