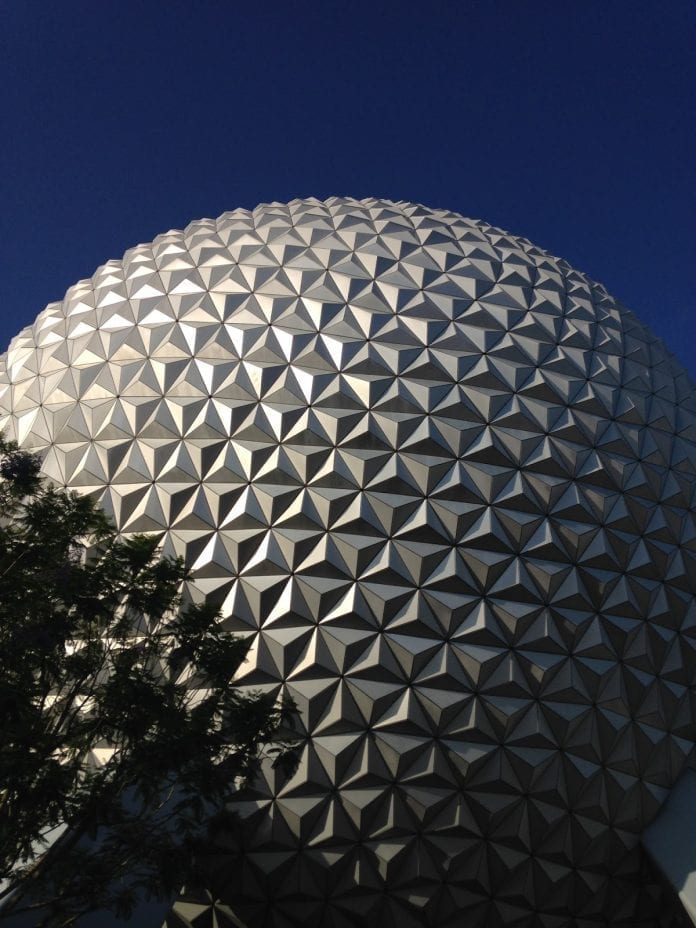 As we continue our “Departed Disney” lineup, we’re taking a closer look at Epcot’s former Earth Station experience. For many of the new readers here on the site, you may be more familiar with the locations current name, “Project Tomorrow.” While the current rendition of the space is quite fun and incredibly immersive for guests of all ages, at one point this area was a key part of explaining the Epcot Center experience. When the Epcot concept really took center stage in Disney development in 1964, Walt had an idea that would never really fully develop, the Experimental Prototype Community of Tomorrow (Epcot). His plans were grand and set to be an elaborate place where people of all ages could live in a expertly planned community. Unfortunately, we all lost Walt in 1966 and the plans for this grand community were scaled back to a version of the park we get to experience today.
The Epcot of year’s past was a different experience that it is today. Upon it’s debut in October of 1982, the entire park was a step into the future for guests of all ages. There were outstanding new technologies on display that you could not only see, but interact and learn from throughout your day in the park.
Spaceship Earth served as a beacon to guests traveling hours on end to come and experience the new creation. However, what lies just beyond Spaceship Earth was the “key” to planning their day in the park, Epcot’s Earth Station. The station was just a taste of all Epcot had to offer at the time. It was an information station like no other while introducing guests to the most advanced technologies at the time, simple touch screen interfaces and large informational displays.
By today’s standards, these technologies are quite simple, but at the time, these concepts were truly just staring to develop. Disney used this new touch based technology to help guests find new information about the park and to discover all that Epcot had to offer as a part of what they called the WorldKey Information area. Opposed to in the past, this service allowed guests to learn for themselves in a sensory based environment without having to interact with real employees behind a series of counters. It was a forward thinking idea and one that really immersed the guest in the entire experience Epcot intended to portray. For many, this truly felt like “tomorrow’s” technology and as many of you are likely experiencing right this moment (using your phone), that technology did actually develop into “tomorrow’s” normal. (Photo: Loren Javier)
Of course, as with many elements of Disney at the time, the Earth Station was a sponsored experience and continues to be even today (in it’s current form). At the time, the entire area was brought to guests by the Bell System organization. Many of you may be more familiar with it’s later iteration as AT&T. Years down the road in 2007, the renovated area, Project Tomorrow, brought the Siemens brand into the park where it has remained for quite some time. That rendition of the area you can still experience today. Of course, it is a far cry from the original design and you won’t be seeing images of World of Motion or even Horizons on video screens above your head, but it still remains a forward thinking area of the park.
It’s a bit amazing to me how things have changed over the year. Epcot has always been an interesting concept that has grown and developed over time. Even recently, Disney has announced that some big changes are set to arrive in the park in the not-so-distant future which are supposed to stay true to Epcot’s origins while updating the current experience.
We’ll just have to wait and see what happens, but for now it’s great to look back at “what was” in order to have a greater appreciation for “what is” today.
Thanks for reading and be sure to join our Disney email community down below (below the comments on mobile). We’re set to share some surprise guest writers and possibly a big opportunity were working on in the near future. Don’t worry, we won’t destroy your inbox with emails and you can unsubscribe at any time. Your support really helps us out! Thanks!

Collin Kendall - April 25, 2019
by: guide4wdw - Collin Why Staying On Disney Property Is Our Only Recommendation!   Nearly two weeks ago I came up with this topic for an...