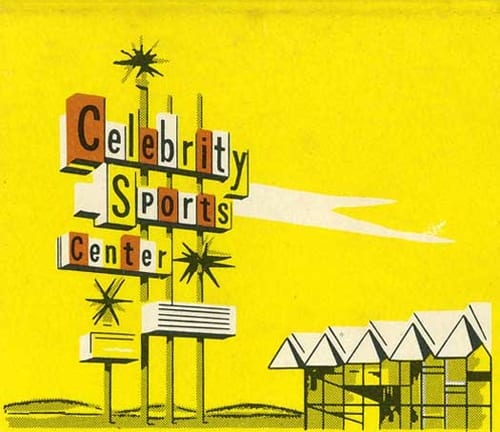 As many of you may know, Disney has an extensive and encompassing history. However, as with much of what we share here on the site, quite a few elements really get overlooked by a majority of Disney fans and even many Disney connoisseurs. So, today we bring you something that was separate from the parks in a unique way and didn’t even take place on one of the two coasts! The Celebrity Sports Center was a concept that developed into a reality with Walt Disney highly invested in it’s success for many years. The center itself was located in Denver, Colorado and debuted in 1960, just a short time after Disneyland’s debut in 1955. The overlying concept was essentially a large-scale recreation center featuring multiple bowling lanes, an enormous arcade, bumper cars, and even a pool facility complete with waterslides. After a short 2 years of use the entire project was purchased by Walt Disney Productions and was reportedly used to train employees who would be working at the new Disney project, Walt Disney World in it’s 1971 debut. (photo: wikipedia)

The entire facility was built by a series of celebrity investors (reminiscent of it’s name) and included in the group were big names including but not limited to Bing Crosby, George Burns, Burl Ives, Walt and Roy Disney. The combined efforts of these investors helped bring the 6 million dollar facility to life. After about 20 years of active and constructive entertainment for guests of all ages, the property was completely given up to an external investor (and then a second investor after a short time of operation) and closed after about 20 more years of active use. Today, the project has been completely destroyed and built into a much more modern use of the space as a retail shopping location.

To me, this simply extends the legacy of the Disney company beyond the parks and resorts. Little pieces of Disney can be found across the country and often in some of the most unlikely places.

If you liked this article, be sure to SHARE it with friends! Your support really helps us grow and develop the site for your future enjoyment! Thanks!