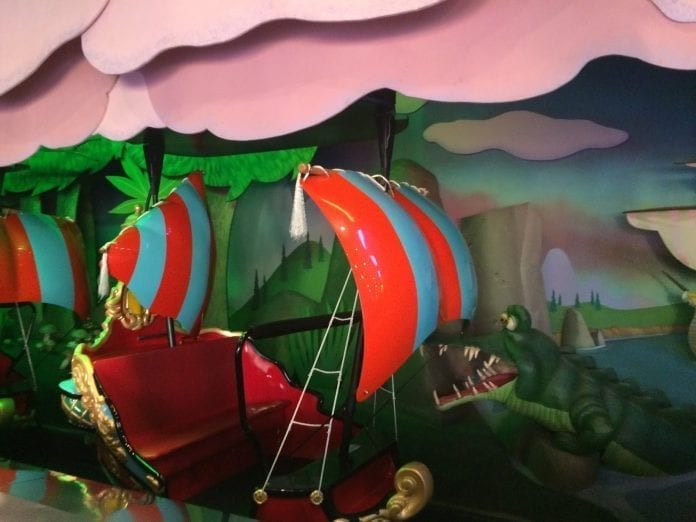 Throughout the Magic Kingdom, you’ll find a wealth of hidden details and overlooked elements that so many guests walk right past. While we’ve covered many of them on this site, there’s one that I haven’t quite shared, the Lost Boys barrel. As you can imagine, it is much more that simply a barrel used as decor or added scenery in the cleverly designed land. To the surprise of many, this simple detail holds a quite practical application. In the development of Fantasyland, each aspect was designed to be period specific to Old World Europe. Everything from the architecture to the music you hear in the background as you stroll through the land was designed with the purpose of bringing a story to life before your very eyes. However, Walt set a precedent for this area in other projects that revealed his immense attention to detail. In the parks he intended to develop a story in real life just as he did on screen. Walt could take these ideas he developed on a movie screen and turn them into something real and tangible that guests could interact with. However, everything had to be perfect. Every element had to be period specific and every aspect of the experience had to develop an authentic representation of the “story” being portrayed.
So, in the production phase, Imagineering took this concept and applied it to every detail of the experience. That concept is what brings us back to today’s “Hidden Detail.”
As you can imagine, accidents happen in real life environments, so every possible precaution had to be made to guarantee the safety of the guests in the park. In order to do so, a fire hydrant had to be installed in the land. That requirement presented a challenge and conflict of interests to the Old World Europe theming. To rectify the issue, Imagineering got a bit creative and developed the Lost Boys Fire Brigade barrel.
Many of you will certainly recognize the “Lost Boys” reference from Peter Pan, but it also brings us to the second part of the story.
The barrel itself sits about 20 feet from entrance to the Peter Pan’s Flight attraction and is inscribed with the phrase, “Fire Chief Richard LePere Jr. – Lost Boys Fire Brigade.” As you can imagine, this is the ultimate connection between the aforementioned issue and the barrel’s design. Disney developed this barrel in order to cover a fire hydrant type device which could be easily utilized by the Reedy Creek Fire Department in the case of an emergency while still painting an immersive environment for the guests. While that portion of the story may be fairly self explanatory, the story behind the name is not quite as obvious. In the world of Disney, very few things are done simply to add detail, but rather to further develop the backstory for the guests. In this case, the name written on the barrel is actually the title of the Fire Departments Chief which serves the Magic Kingdom and surrounding areas. The name associated with the fire chief has changed over time, so the barrel has been adapted and repainted to reflect the current individuals title (As I am not currently a local, the name could have changed since my last trip to the park, but I believe that is the current description). In years past, the hydrant facade featured the name Ray Colburn, the former fire chief.
The barrel certainly has an intricate story behind it, but it also serves an increasingly necessary function as the parks become more advanced and more guests travel through the gates each and every day. Many who visit the Magic Kingdom will walk by this hidden gem for years on end without ever realizing the simple secret it holds.

If you learned something new today or simply enjoyed the article, please SHARE it with friends. If you’re new here, be sure to join our email list below and follow us on your favorite social media platform!