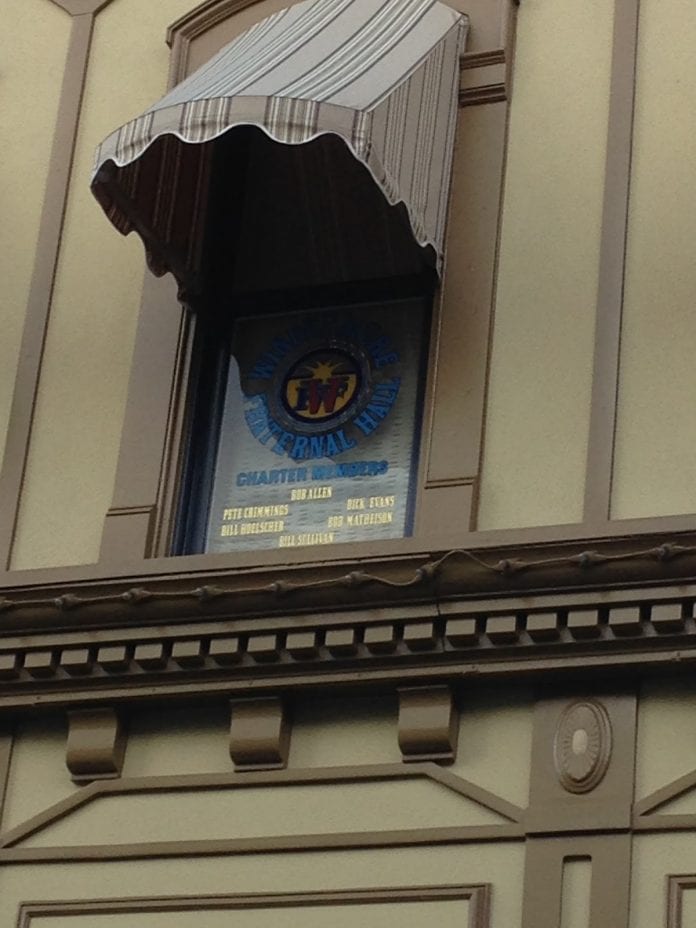 The Main Street experience is above all else, a multi-sensory experience. From the grand entrance at Main Street Station to your detailed journey through the many elements of the 1890 facade, pieces of the theming have a much greater backstory that many guests simply overlook.
High in the windows above the street, an entire history of many individuals can be found if you simply explore the names and listings that help develop the authentic Main Street experience. While many of the business listings and storefront windows you see have been developed with no true link to the real world on their own, the names these windows hold develop the intricate backstories of some of the most influential cast in Disney Parks history. Every window tells a unique tale, but today we’re taking a closer look at one of my favorites simply because of one particular individual. The window itself prominently features the title, ‘Windermere Fraternal Hall: Charter Members – Bob Allen, Pete Crimmings, Dick Evans, Bill Hoelscher, Bob Matheison, and Bill Sullivan.” While all of these individuals played an outstanding role at some point in Disney History, today I want to focus on a name that many of you may or may not recognize, Bob Allen.

Bob had a rich history with the Disney company which began in Disneyland as a train ride operator. His role at that point was to assure guest safety and to blow a whistle to signal the train to stop in case of an emergency. In the beginning, this was simply a job to provide money for his efforts with higher education. This seemingly minor responsibility developed into many positions later on at Disneyland. His later roles brought him to a management role at both the Golden Horseshoe (in Disneyland) and Disney’s Celebrity Sports Center in Colorado. Later on, Allen climbed through the Disney “ranks” and found himself as the Vice President of Walt Disney World less that 10 years after it debuted. Sadly, in 1987 we all lost a piece of the Disney community when Bob passed away due to a heart related problem.

Fortunately, this isn’t where the story ends. Beyond the parks and resorts and his many roles throughout those locations, Bob Allen was better known for his role in the community. He has been cited by many individuals over the years as being one of those people that put you in the forefront of his mind when you talked to him. He was an individual that many enjoyed being around and who did whatever he could to make a person feel special. He gave his time and often his money to better the community and to interact with those around him in a meaningful way. Now, you may be wondering how all of this connects with the window on Main Street. Well, for years it seemed as if the only connection between the group was that they all simply lived in Windermere, Florida at the time. However, Bill Sullivan shared in an interview with Lou Mongello stating that many of the individuals listed on the window spent time with each other outside of the Disney realm and even fished with each other from time to time. Modestly, he adds, “they just wanted to fill up a window on Main Street.”

You see, these simple details can develop outstanding references to history, and really help develop that level of detail Disney has become known for over the years. Every detail has it’s purpose and Disney makes these intriguing connections in ways that truly amaze guests who explore the history behind the magic. If you want to explore this hidden detail for yourself, head on over to East Center Street at the Magic Kingdom along the right hand side of Main Street U.S.A.!

Thanks for reading, and have a great rest of the day. If you like this article I simply ask that you SHARE it with friends and help us build this online Disney community. Thanks!