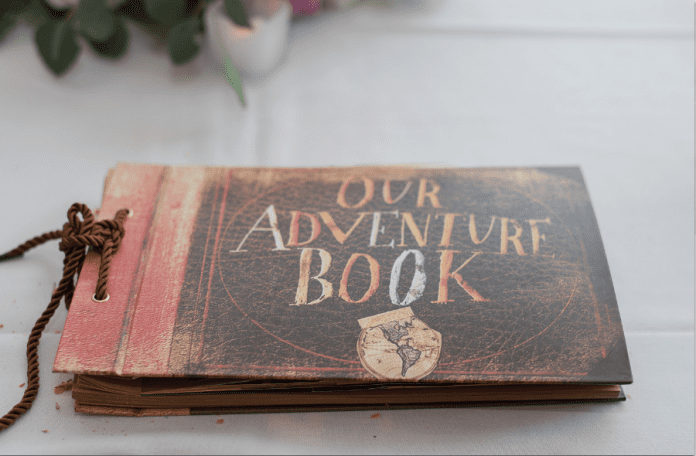 Adventure Is Out There! – A Disney Wedding Like You’ve Never Seen Before
by: guide4wdw – Caitlin

twitter: @guide4disney
instagram: @guide4wdw
All weddings are beautiful, but with a touch of Disney, your
special day can be downright magical. I had the privilege of attending the
wedding of one of my sweet friends who created a picturesque scene inspired by
the delightful Carl and Ellie. Catherine and Zak are Disney lovers at heart and
would’ve made PIXAR proud with their homage to the beloved film. From the “Up” soundtrack to a fireplace filled with balloons, take a look at the beginning of
the Ransom’s greatest adventure.

The story begins with Zak’s incredibly adorable proposal. He created a scrapbook of all of their memories together, and on the last page were the words, “Marry me?” The occasion was completed with a bouquet of balloons fit to give Carl and Ellie’s house a lift to Paradise Falls. Major props for creativity, Zak. We are highly impressed.

Fast forward to the big day. Catherine and Zak took great care to ensure their wedding celebration was full of details from their favorite film. When entering the ceremony space, you were greeted with a small scale version of Carl and Ellie’s home, complete with balloons. Friends and family of the couple were encouraged to sign a balloon on a beautiful canvas inspired by “Up.” The soundtrack of the movie was played as guests arrived – a sweet addition to the whimsical atmosphere. Before Mrs. Ransom could walk down the aisle, she needed a few Disney touches of her own. Catherine’s beautiful gown was hung on a Mickey hanger adorned with her new name and wedding date. In true dedication to the film, she also pinned to her dress, “Our Greatest Adventure.” Catherine and Zak’s reception was where their “Up” theme truly came to life. The space was centered around a scene straight from the film. On the stage sat two vintage chairs and a fireplace filled to the brim with – you guessed it – balloons! Also on display was a confetti cake topped with Carl and Ellie themselves.

As you explored the reception venue, Disney touches were found throughout the area. The centerpieces featured larger that life balloons with beautiful ribbons cascading down to the table. Table numbers were found on large jars equivalent to those Carl and Ellie used to collect money for Paradise Falls. Extra points for creativity, friends! The beautiful couple danced the night away at their Disney dream wedding. I think Carl and Ellie would be proud! We wish you the very best, Catherine and Zak! Here’s to happily ever after. 
If you want to see more posts like this from Caitlin﻿, be sure to let us know in the comments or on your favorite social media platform.