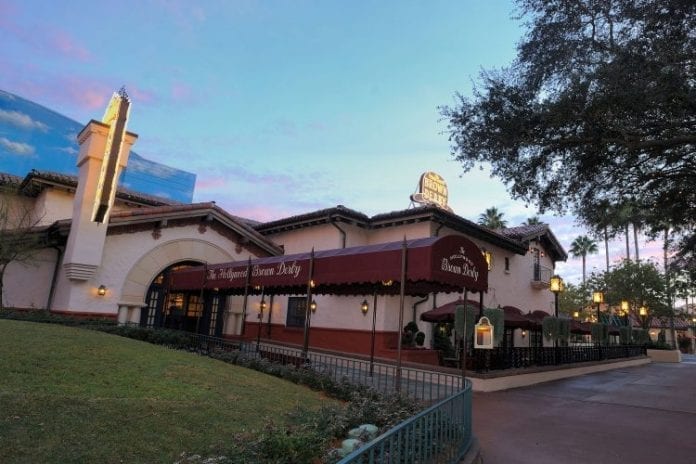 When you look back through Disney parks history there’s always a few things that you wish you could have seen in person. For many, it’s a classic attraction or even a dining establishment that has faded away over the years. Personally, there’s so many parts of the magic that I wish I could have experienced, but perhaps one of the most interesting is what we’re sharing today, The Catwalk Bar and Soundstage Restaurant. Long before Star Wars and Toy Story Lands were ever thought of, Hollywood studios was a place that truly embodied the “Hollywood” experience. From the real life sound stages to the  elaborate guest experiences, everything felt realistic. The Soundstage Restaurant was no different.
The location itself developed greatly over the years, but in the early days it featured a buffet style dining environment with a character meal tie in. It was a great experience for guests of all ages and something everyone could enjoy. Later on, the space was reimagined and developed into a food court style counter service offering.

However, the theming is where the restaurant really thrived. Once you walked through the doors, you were instantly enveloped in what looked like an operating stage set used in big blockbuster productions. The concept even went as far as to bring in cast members dressed as a catering crew. It truly was a one of a kind experience for all of those who got to enjoy it.
Of course, the real story begins with the famous and somewhat hidden Catwalk Bar attached to this classic eatery. The bar itself overlooked the entire Soundstage restaurant from above and offered a rather impressive place for guests to hang out and get away from the Florida heat and crowds of the park.
The Catwalk Bar was a clever concept where guests utilized two different staircase entrances that were vaguely marked. The first and perhaps the more obvious entrance was from the restaurant below. However, the glowing sign of the bar led the way to a second entrance inside of what is the far left hand portion of the Brown Derby.
After many years of operation, the Soundstage Restaurant closed to guests as the area was reimagined into The Bear and The Big Blue House Show which was later replaced by Disney Junior – Live On Stage. The Catwalk Bar continued operation for a short time after the Soundstage’s closure in 1998, but ended up closing it’s doors likely due to the inconvenience of the location’s only entrance through the Brown Derby. Today, the only real remnants of the location can be seen from inside the aforementioned Brown Derby and surprisingly over at the Magic Kingdom! The entrance from The Hollywood Brown Derby remained easily visible for many years and was simply blocked off by a rope. Just recently, Disney took action and randomly blocked the area off with their typical construction barricades. Many believe this could end up developing into the location of Hollywood Studio’s Club 33 location. Disney just recently announced that each park is set to open a Club 33 location, but that is really all that has been released regarding the new concept for Walt Disney World. All locations and theming are simply speculation. (photo: flickr)
Over at Magic Kingdom, if you head to The Magic Carpets of Aladdin, you can catch a glimpse of a remnant of the dining establishment many grew to love over the years. The camels you see at the attraction once “guarded” the entrance of the Soundstage dining location during one of many theming variations over the years. Today, the entire concept has really faded away, but if you look closely in today’s park you can still picture the concept in your mind and remember the history of the park we all know and love. Sure, it’s changing, but we’re looking forward to new experiences that will arrive in the near future!
Thanks for reading and be sure to SHARE this article with friends! Thanks!