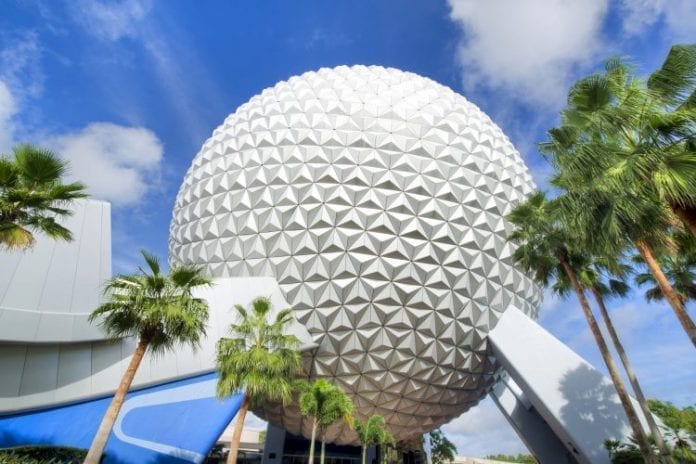 Epcot center changed drastically in it’s early years of operation. As technology improved and new ideas were born, the park grew and developed as the world around it changed. Unfortunately, today many of the early aspects of Epcot center have faded away and the park has remained fairly untouched for quite a few years. For nostalgics (like myself) that isn’t always a bad thing but at a certain point certain elements of any park need to be updated. However, by looking back at “what was” it helps us appreciate what could be next for the park we all know and love! So, we’re taking a look back at one of the most interesting, yet short lived, attractions in the history of Epcot Center, The Astuter Computer Revue. This seemingly simple show based attraction was a huge part of the Communicore concept.  The series of pavilions was truly an expansive discovery experience. Guests could interact with some of the most cutting edge technologies at the time and slowly yet surely accept the concept of computers in a cutting edge and guest friendly environment. It wasn’t an intimidating place, but rather an experience to explore. Throughout it’s run time, a series of small scale “attractions,” shows, games, and technologies allowed guests to get hands on experience with things that had never been seen before. Many large companies including Bell System (which later became AT&T) sponsored these areas in a similar way to how Karamell-Küche, over in the Germany pavilion, is sponsored by Werther’s today. However, The Astuter Computer Review was a small, yet iconic, piece of the Communicore experience. Housed in Epcot’s Computer Central area, the Astuter Computer experience led guests up a ramp to an elevated viewing platform. As the show began, guests peered through a glass panel and took in a variety of different computers and information systems which (at the time) controlled everyday operations of Epcot. Of course, today there would be no need for such a large operation considering how far technology has come, but at the time, this was an exceedingly cutting edge computer set up. For many guests, it very well could have been the first time they had seen an operation quite this extensive.


As the show began, Disney used a similar affect to what we discussed not too long ago in our article about the Haunted Mansion, the “Pepper’s Ghost” Illusion: Link to Article. In applying the same concept of reflection to create a hologram (not a legitimate hologram) looking figure, the Astuter Computer Review brought to life a small character to hop around the computer room  (of course by appearance only – the character was not in the room with the operators) and share information about Epcot’s “control room.”


The show even had it’s own catchy song written by none other that the Sherman Brothers! Of course, I can’t leave you wondering what it sounds like so here you go!

As you can likely tell from the song, it was a rather upbeat concept which was typical of the Sherman Brothers at the time and still is today. It was catchy, yet at the same time a little “interesting” for lack of a better word. However, many guests who experienced the show first hand still remember that catchy song.

Sadly, the Astuter Computer Revue closed it’s doors to the public in 1984, just two years after the day-one attraction first debuted to guests. Taking it’s place and sticking to much of the original concept was Backstage Magic. While the overlying concept remained mostly the same in appearance, the main characters of the story changed. In 1993, the experience was closed completely and now the only remnants of the Communicate pavilion are found in what once was a grand Innoventions experience. The Innoventions concept, which many of you may still remember is slowly but surely fading away and changing into character meet and greet locations until a new experience is announced.

As mentioned in other articles, I can all but guarantee changes are coming to Epcot in the not-so-dinstant future. Will we get an announcement at D23 in July? I don’t really know. However, we do know that according to Disney changes are in fact coming!

What would you like to see next? If you liked this article, please share it with friends and continue helping us build this Disney community! Thanks!

Collin Kendall - November 14, 2018
by: guide4wdw - Collin I know many of you likely clicked on this list to find the best attractions in each park or even potentially the...