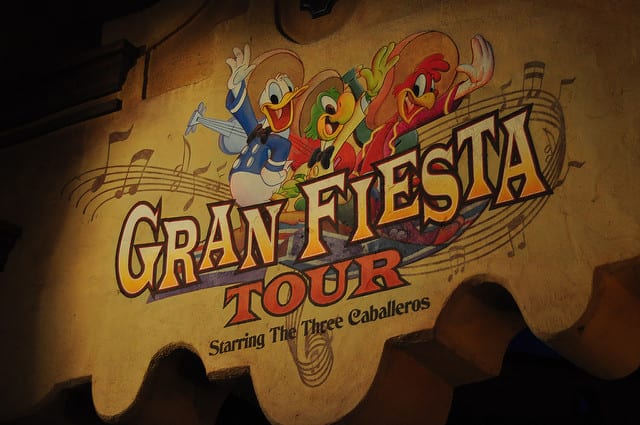 The Interesting Backstory of The Three Caballeros Animatronics In most of our articles regarding Disney history, many of the things we tend to share are elements of the Disney experience that will never or can never really return to the parks. Today, however, we have a unique story of traveling animatronics that have recently returned to Walt Disney World, the Three Caballeros.

As many of you may have noticed, the Gran Fiesta Tour at Epcot’s Mexico pavilion recently received a brief change that has brought a nostalgic element of the parks back for guest enjoyment. Animatronics prominently featuring each of the Three Caballeros are displayed during the final scene of the ride, but what many do not recognize is that these unique creations have an interesting history of their own. In the early days of Magic Kingdom, there was a show called the Mickey Mouse Revue. The production featured animatronic characters performing as Mickey’s grand orchestra. Of course, today we have a slightly similar iteration of that same concept with Mickey’s Philharmagic Orchestra. However, rather that an on-screen production, a majority of the action took place through live, animatronic, figures. As the show progressed, over 20 characters rose to the stage and debuted a song of their own or one combined with others in the group.

The Three Caballeros performed their iconic medley in a fury of lights and sounds as shots from Panchito’s pistol rang throughout the room. The characters jumped from location to location in a way that only Disney Imagineering and creative lighting could really develop! Unfortunately, after 9 years of service to the park, the attraction was retired and removed from Walt Disney World completely in September of 1980. A few short years later, in April of 1983, the attraction “re-opened” in it’s new location at Tokyo Disneyland. While it wasn’t quite the same, The Three Caballeros made the journey and spent over 20 years as a part of that show until it closed in 2009. The animatronics have officially resurfaced in Florida over at Epcot as a small piece of the boat ride the pavilion has become known for. Their arrival debuted rather unannounced as Disney installed the characters quickly and quietly quite some time ago. For the nostalgic Disney fan, it was a homecoming and a small piece of an attraction that many had grown to love.

Thousands of guests ride the attraction each and every day, but very few know this extensive backstory of the animatronics. Next time you’re in the parks, take a few minutes to ride the attraction and appreciate that Disney history hiding in plain site! Until next time, thatks for reading and please share this article with friends!