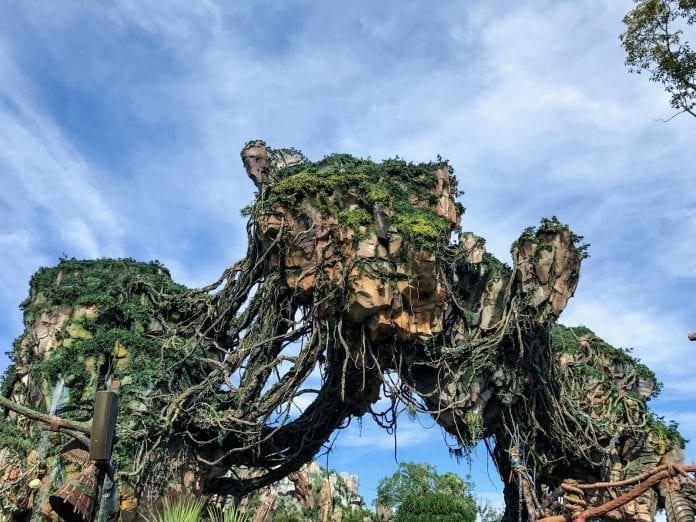 As many of you may know, we recently returned from a trip to Walt Disney World. It was another outstanding experience, but part of what we were truly looking forward to seeing for the first time was Pandora. Of course, it’s the big “must-do” for Disney this summer, but to be quite honest I wasn’t always a fan of the project. When Pandora was first announced back in 2012, I was one of the earliest critics of the concept. To me, Pandora wouldn’t fit the theming of any Disney park, and much less, Animal Kingdom. As more details rolled out I slowly, yet surely, let the project grow on me. However, It wasn’t until Joe Rohde was announced as a predominant leader in the project that I truly got excited about the new development. Of course, I still had my doubts.


As time went by and the new animatronic was officially teased (which later became the Shaman from Na’vi River Journey) I honestly began looking forward to the land’s distant debut. Long story short, as more and more details unfolded, the level of detail involved and the painstakingly intricate design process played out, I was ready to see it for myself.

Once media events really started rolling and pictures finally started trickling out, I knew this place had to be something incredibly unique, but I wanted to hold all of my personal judgement until I experienced it first hand. To be quite honest, when we got to the park on the first Sunday of our week at Walt Disney World I was beyond impressed. First and foremost, as you make your way through the park it truly feels as if you are entering an entirely different place when you approach Pandora. The environment leading up to the grand “reveal” slowly surrounds you with subtle details. As you round one last corner of the path, you really step through that “portal” Disney has accomplished so brilliantly time after time. The instant reveal really blows your mind. The mountains appear to float ever so effortlessly over the guests below and even create the illusion of slight movement (while they remain still). It’s an experience that’s incredibly hard to put into words. The whole scene seems so impossible, yet you’re seeing it right in front of you.

The details of the land are really second to none, and coming from me that really is a bold statement. I’ve always been about the little details of the Walt Disney world experience, but this really takes things to a new level. Not only are the details a part of the experience, but they’re truly everywhere you look. Even before taking the attractions into account, the area really lends itself to simply walking around. As a guest, you could spend days on end there and never really take note of everything in the environment around you. For that reason alone, you can see how it took nearly 5 years to complete.

From the exotic sounds, to gurgling waterfalls, and seemingly endless exotic plants, this is really an experience like you’ve never seen before. Believe it or not, the land is an entirely different experience at night as well. I didn’t really believe the hype of nighttime in Pandora (and I still prefer it in the light), but the atmosphere really comes alive with an entirely different light and a variety of sounds.


The entire place is a photographers dream. Now, I certainly don’t consider myself a photographer, and even I could leave Pandora with some outstanding images (included in this post). It’s really interesting to think about the whole photography aspect of the experience. As is true in many cases, Disney creates an environment that encourages photography in a way that no other amusement park can truly capture. How many people do you know that stroll through a typical roller coaster park taking pictures of everything? Disney takes things to an entirely different level, and the results really speak for themselves!

In regard to the attractions, Na’vi River Journey exceeded my expectations. Yes, it is a slow moving and quite short dark ride, but it’s an attraction that has incredible re-rideability. You could experience this attraction 10 times and see so many different details of the experience each and every time. Personally, I wish Disney would have made it about 2 minutes longer that they did, but the queue and surrounding areas more that make up for the short attraction.


The Flight of Passage E-ticket attraction is nothing short of spectacular. Personally, I was a bit skeptical going into it due to the fact that I do get motion sick (see out article: An Honest Analysis: Flight of Passage From A Motion Sickness Perspective), but I really was blown away by the experience. There’s nothing quite like it and that’s really the best way to explain the entire ‘Pandora: The World of Avatar’ expansion. At many points in the experience, there are no words to describe what you’re seeing and experiencing. I understand that sounds ridiculously over positive, but it’s just something you have to see for yourself to understand.

If you haven’t already, be sure to find a way to get to Pandora! I was skeptic at first, but that view has certainly changed! Thanks for reading and have a great rest of the day! If you liked this article, please SHARE it with friends! Thanks!