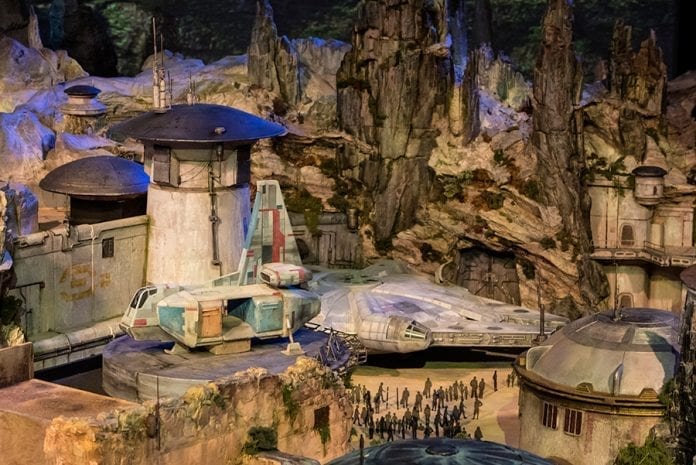 Throughout the day today we’re going to be updating you on everything we can as it debuts at the D23 Expo 2017. While it is still quite early on in the event, a few new announcements have already been made and many more are likely on the way. Unfortunately, we are not at the event this year, but as new information starts rolling out we’ll share our thoughts and all the details in this one continuously updating post! First and foremost, just last night Disney released, much earlier that expected, (which hadn’t even officially started yet) a model of Star Wars Land at he event. The entire set up will be on display throughout the weekend and it is truly hard to put into words. The model is gigantic and based on live video rolling out from the event this morning, it looks as if cast are telling guests that this is in fact the model for Disneyland. There have been a few inconsistencies in that fact, but if it is the case, this will be a huge expansion for Disneyland. Honestly, it will be interesting to see how it will fit in the park! Another aspect worth mentioning is that if this is the size of the Disneyland model, I can only imagine what the Disney World version could look like when it is complete. Perhaps the most interesting aspect of the display that I see getting overlooked by many sources is the small window on the model which showcase the “entrance” into this new land. It truly will be like stepping into a different galaxy. Based on what has been debuted so far, it looks as if you will step through an opening in the path (which blocks your view) creating a grand reveal as you enter the new land!


If you haven’t seen the images yet, be sure to check out the photos debuted by the Disney Parks Blog included in this post!
Also worth noting is the fact that just this morning, D23 announced that Whoopi Goldberg will become a Disney Legend (likely occurring right now). That portion of the D23 presentations is currently in progress so we’ll update you with any fun info from that event as it wraps up.

Surprise! @WhoopiGoldberg will be honored as a 2017 Disney Legend at #D23Expo pic.twitter.com/wG5hCT4Gk0

For now, we’re signing off for a few minutes to find some new information to share! Thanks for following along with us and please SHARE this post throughout the day as we update it! Each update will be marked in the article by the word UPDATE followed by a time (EST).

UPDATE: 2:55pm (EST)
As a part of the Disney Legends presentation, Mark Hamill, Whoopi Goldberg, Oprah Winfrey, the legendary Stan Lee, Wayne Jackson (who was a big part of audio-animatronics in the Haunted Mansion and other icon attractions), and others were inducted as Disney legends! While this wasn’t exactly a surprise, each of these individuals have played an iconic role in the Disney franchise!

Also, just to share an interesting bit of information. It appears as if a piece of the Disney Dreams store has collapsed on guests. It is really unknown to us at the time being if anyone was significantly injured or not. Emergency services have been called just in case. According to some pictures being shared on social media, it looks as if a display shelf toppled over onto some guests shopping in the store.

Wall of gowns collapsed on a guest in the Disney Dreams store. Paramedics are on the scene. #DISD23 #D23Expo https://t.co/dRjx7PYJgP pic.twitter.com/fPbKDWUhXO

For now, this is the most up to date information we have but check back with us in a few hours for another update about the Expo. Our next update will likely roll out later tonight with our thoughts and opinions of the days events! Thanks again for following along with us and while we’re not at the event, we’ll do what we can to keep you updated!

UPDATE 9:45pm Nightly Recap: Day One
Well, today was an interesting day for sharing D23 event info. While most of the day was focused on the Disney Legends Ceremony and information about upcoming films in animation, Friday was really big for guests to start checking out the show floors and this year’s booths.

However, here’s a few big things we missed while we were away from the computer/phone late this afternoon (East Coast Time).

First and foremost, we have a much better idea of what to expect from “Incredibles 2.” the film itself is set to debut on June 15th 2018 and according to reports quoting John Lasseter, it will in fact pick up exactly where the last film left off. While there was a bit of speculation concerning that fact after some brief concept art was released just a short time ago, it all is now essentially confirmed. Also worth noting is that Brad Bird is the Director of this film just as he was the last one, which should create an outstanding blend between the two films despite the long gap between them in real life. Personally, I’ve been waiting for this sequel for years so this was outstanding news!

Another film in the works is Ralph Breaks the Internet: Wreck it Ralph 2. While this wasn’t necessarily a surprise, the film has been expected for a fair amount of time, it is a bit surprising how Disney seems to be “pushing” this film. Based on video from the event, they movie has it’s own (and quite impressive) booth area to promote the movie itself, but Disney really pulled out all the stops during the presentation. As a scene from the film sharing a closer look at Disney princesses involved with the film debuted to guests, John Lasseter was joined by the voices of many Disney princesses from over the years. Actors that performed voice overs ranging from Jodi Benson to Kristen Bell arrived on stage! Each of these princesses were invited back to voice their characters for there piece in the upcoming film.

Last, but not least, a few vague details were shared about an upcoming Disneytoon studios film about the next generation of aviation in the “cars/planes” realm of films. While the concept is title-less right now, more details will likely arrive in the future. Pixar also shared some more info about a continuing franchise we all know and love, Toy Story. The next leg in the series will be Toy Story 4 and will be directed by Josh Cooley. While very little was shared about the film itself, it is supposed to debut June 21st, 2019. Frozen 2 was also supposedly mentioned at the event and is set to debut November 27th, 2019. If all of these films debut at the set dates, 2019 will be a huge year for animation!


Well, that about wraps up the highlights for today, but be sure to return right back to this post tomorrow for even more info as it is shared. Again, we are not at the event, but will get the facts and our opinions out to you as soon as we can! Thanks for reading!


UPDATE: Saturday 9:25pm
After the mass release of Disney parks info that just rolled out in the parks and resorts panel, we’re going to take some time and really look at the whole release. We should have a full report at some point in the next day or so. Thanks for sticking with us. There’s a lot to take in. This will likely be the end of this post and a new article will roll out with more info!