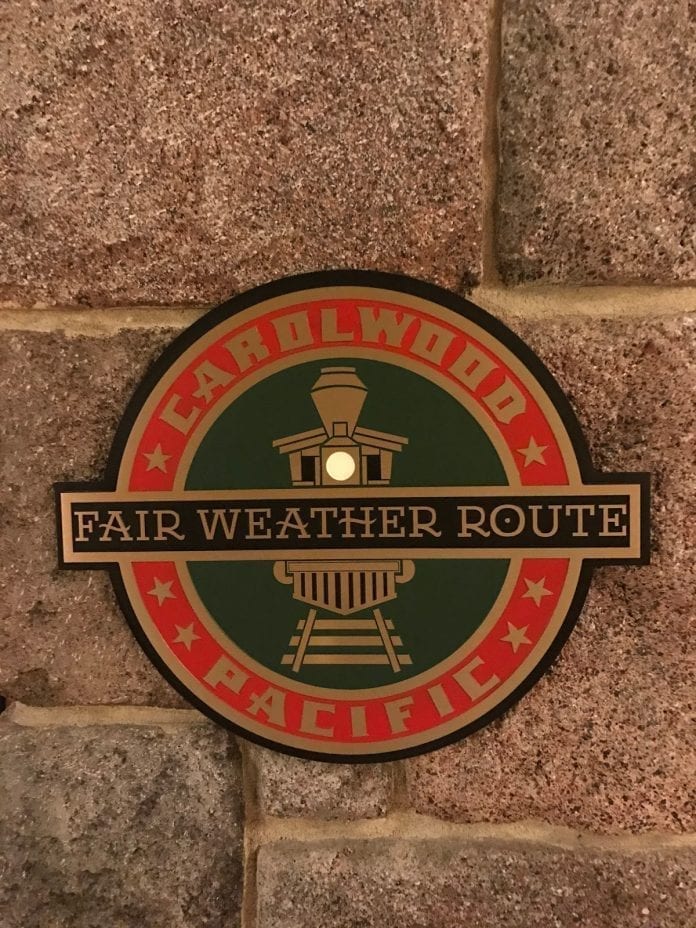 Over the years, Walt Disney was fascinated with all sorts of things that were mechanical. While the fascination with such objects is something many of us can understand and truly appreciate, Walt took that simple inclination and ran with it throughout a good portion of his life. Today, there’s a small section of the magic that Walt never got to see, but that chronicles a great portion of his life that many guests will simply never take the time to appreciate. So, today I wanted to share with you a hidden gem of Walt Disney World. It won’t cost you money, and honestly it won’t cost you a whole lot of time, but you’ll leave this place with a greater appreciation for the man who started it all!

If you’re like me, and appreciate the history behind the magic, head over to the Carolwood room at Disney’s Wilderness Lodge for a rare look at Walt Disney the man rather that simply his Disney Parks creations.


Walt was inspired by the little things in life but one of his greatest concepts that rarely gets the attention it deserves was the Carolwood Pacific Railroad. While this was not a full scale operating railroad, Walt built an utterly amazing miniature railroad in his own backyard at the Carolwood estate in Holmby Hills, California. The project itself was quite the undertaking, but through the vast knowledge of Roger E. Broggie, a 1:8 scale locomotive was created and eventually detailed out by Walt Disney himself. The small locomotive was named the Lilly Belle in honor of Walt’s wife Lillian Disney and first ran on the tracks at Carolwood on May 7th of 1950. Interestingly though, in the beginning Lillian had one gripe about the overall project, she didn’t want a train traveling through her flower beds. As a result, the creative mind of Walt Disney came up with an idea for a tunnel with the help of Jack Rorex who worked for him in construction. The tunnel itself was called the “Rorex Tunnel” to credit the man behind the idea. Overall, the tunnel was 90 foot long and “S” shaped. That simple design element is interesting because if you were on the train you couldn’t see light from the entrance at the same time as light from the exit. It just goes to show, that the little details were all a part of Walt’s nature. He thought of so many things most people would glance right over.

Unfortunately, in time Walt slowly built the Disneyland Park (debuting in 1955) and the grand in scale Carolwood Railroad was sold to a new owner with the home after many years. Thankfully this project led to a full scale locomotive operation at each of the Disney parks. Also worth noting is that in the early years of Disneyland, a great deal of the “transportation” within the park including the monorail (eventually) and each of the locomotives were technically owned by Retlaw (Walter spelled backwards) which later became WED Enterprises. As a result, Walt technically owned the operation of these Disneyland transportation resources and supposedly hand signed the checks of each cast member involved with these resources as the owner of Retlaw Enterprises.


Now, you may be wondering how this all relates back to a room at Walt Disney World? Well, in the heart of Wilderness Lodge’s Villa Lobby you can find a small area that pays homage to this unique, yet highly influential piece of Walt Disney’s elaborate history affectionately called the Carolwood room. For years, I have stayed at Widerness Lodge, but not until recently did I recognize this small piece of classic Disney hiding in plain sight. Each and every day, guests of all ages pass by this beautiful display of Walt Disney information and artifacts without recognizing the influence it could have had on their vacation from essentially the beginning of Disney as we know it. As a Disney history connoisseur, experiencing this place was something that really made me take a step back and think about what I was seeing. Throughout the room there’s a variety of simple images and artifacts (some real, others reproductions) from Carolwood. The history portrayed by the room is far too much to put in one article, but one piece alone is worth the trip from wherever you’re staying during your trip. In the heart of the room, facing an outside window you’ll find two 1:8 scale train cars with faded white writing sitting in a large display case. Believe it or not, these are two authentic and original pieces of Walt’s personal Carolwood railroad. For a variety of reasons, this has become one of my favorite (if not my favorite) places on Disney property. To me, this is true Disney in a way that very few people appreciate. If you really think about the story this simple piece of Disney history helped create and influence over the years, it’s hard not to get wrapped up in such a simple object. There are countless places on Disney property that have Walt’s influence, but this is one of the very very few things on property that the man behind all of this we appreciate and enjoy personally spent time carefully crafting and detailing with his very own hands.
Despite the simplicity of the item, these train cars truly stand for something Walt Disney personally loved. It wasn’t a part of one of his parks designed for other people, or even for his own family, but rather a passion of his own. To me, that’s a true Disney story. For that reason alone, it’s hard not to explore every little detail of this room once you realize the significance it played in Walt’s own life. Of course, homes and trains come and go, but the story these objects tell can really last forever as long as people keep preserving the legacy of Walt Disney. Personally, I sat in the big chairs of this area for a few minutes just reflecting on the history the memorabilia shares. It’s a quiet area, and there are typically very few guests around, but it’s something that you really have to dig into and explore in person to truly appreciate it’s significance. I typically suggest going late at night. You’ll likely be the only one there, it’s quite, and you can really take your time exploring the little details the room holds. For many of you, Disney is a place that is fun to visit and enjoy with family, and that’s outstanding, but be sure to take a moment and appreciate this small tribute to the man who started it all during your next vacation. Share the legacy of Walt Disney with a friend your traveling with, or even the kids in your life. As with much of Disney history, I truly believe appreciating and sharing the little details of the experience really help build an unforgettable Disney vacation.
In the future, I would be happy to share more of the small details of this room, but for now i’ll let you explore it for yourself. If you want to hear more about this place and the stories it can tell or the memorabilia from it, be sure to let me know and I’ll continue this Carolwood series! Thanks for spending a few moments here with me, and have a great rest of the day.

While you’re here, be sure to shoot me a friend request on Facebook so I can keep in touch with some of our readers and answer any questions you may have! I really enjoy interacting with fellow Disney fans and make an honest effort to personally reply to any comments on our posts! -> Facebook -Collin K.