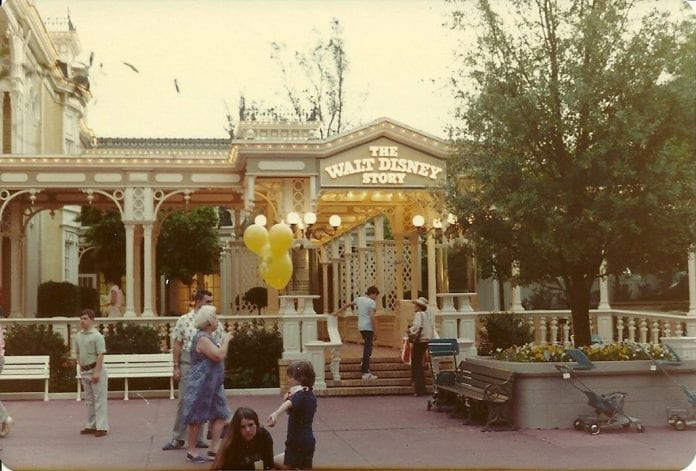 by: guide4wdw – Collin
The “Departed Disney” series has always been a favorite of mine to write. By looking back at what was, and experiencing Disney attractions, dining locations, and shows that have slowly left the parks, we can better appreciate the history of this incredible vacation destination. So, today we’re looking back at a true Disney classic experience, The Walt Disney Story. From 1973-1992, the Main Street experience at Walt Disney World featured a vast variety of truly original concepts, but perhaps none were more “Disney” that the show about the man who started it all, Walt Disney. Throughout the run time of The Walt Disney Story, guests of all ages entered the pre-show area, and marveled at true pieces of Disney history, many of which have become a piece of the Disney Archives over the years. As you waited for the show to load, you could browse the various documents, posters, letters to Walt from famous individuals, and items that each played a roll in the life and influence of Walt Disney himself. Just before the entrance to the show theater area was a Bill Justice mural featuring a vast variety of Disney characters.
The mural was tweaked and adjusted for quite some time as new films rolled out and new characters were added, but over the years this simple mural became a guest favorite for reasons that we may or may not ever understand. It was a signal of things past and the precursor to a story of the man who started it all. It gave people something look forward to and something that changed from trip to trip for many years. After entering the show theatre itself, a narrated story told the life and background of Walt Disney himself. It wasn’t very in depth into Walt’s personal life, but chronicled the story of the creative mind and how his ideas really unfolded before the eyes of many generations of viewers and guests. It not only covered his days with and creating the Disney parks, but took a closer look at the timeframe long before he created the Disney company and branded his most creative conceptual ideas, films, and attractions.
It was a piece of Walt displayed in a park that Walt never really got to see on display for perhaps the largest theme park audience ever welcomed to a single destination, Magic Kingdom. For many guests, this attraction was a dedication to the man who started it all and a bit of a somber while somewhat uplifting experience. It was a story that inspired generations and still inspires guests today, long after the film itself has run it’s course on Main Street U.S.A. It was a non-ticketed attraction (as a result of sponsorship), so guests could really appreciate the film time after time if they chose to do so. Of course, the experience also debuted in Disneyland, but ran a much shorter timeframe ending in 1975.
In the production phase, cast working on the project scoured hours of film, press releases, speeches, and much much more to truly capture not only the life but also the voice of Walt Disney. In essence, Walt told his own story to guests in a round about way just 7 years after his death in 1966. It was a painstakingly detailed process, but one that created a show that warmed hearts and minds of guests for many years. It wasn’t a success story, but rather one of following a dream no matter how impossible that dream seemed at the time.
Throughout portions of its run, Disney utilized the post show (and even the show area at some points) area of this space to debut new experiences and large scale projects like Epcot and The Western River Expedition (a project that was never completed). While none of these were permanent changes, it offered a closer look at big projects on the horizon at Walt Disney World.
Today, if you’re looking to find what’s left of this classic representation, head over to Town Square Theater rather that the original Gulf Hospitality House. It may not look quite like it once did, but I can guarantee you’ll be able to spot what “once was.” Walt Disney is an iconic part of the Disney parks and resorts, but part of me hopes that one day an attraction like this will debut once again to share with generations the nostalgic story behind the man himself. Sure, we see his influence in many aspects of the Disney experience, but there’s just something special about keeping a story of Walt in Walt Disney World. We do still have a representation of him over at One Man’s Dream, but with the changes unfolding around that location, there’s no telling what will happen to that walk through experience. Today, it’s getting quite difficult to experience these extinct attractions for yourself, but thatkfully video of this experience was captured and can still be viewed online at the following link: Video of The Walt Disney Story (1992) Due to technology restraints, the quality of the video is not all that perfect, but the videographer did an incredible job with the technology that was available at the time.

So, what do you think? Did you get to experience this somewhat “lost” attraction first hand? Personally, I never got to experience it in person (due to age), but really enjoy taking the time to research and learn about these departed experiences.

A special thatks to Steve Boutet for these nostalgic Disney photos!


Your Thoughts
As always, if you have thoughts, concerns, questions, or even some tips of your own to share, don’t hesitate to reach out to us on Facebook or your favorite social media platform. Give us a follow while you’re there, and we’ll keep the conversation going in the future. We’re not the largest Disney community, but we’re one that’s there and one that listens. Thanks for reading and have a wonderful day wherever you are!

Ready to Plan?
Need help planning your vacation? Let our friends over at Destinations to Travel (FREE – no obligation quote request form below) help you out at no additional cost to you! Their services are free and a great way for you to help out the site at no extra cost to you! Here’s a closer look at why I recommend an Authorized Disney Travel Planner!

Collin Kendall - June 30, 2019
Something I've never been overly good at, but also something I've always tried to make a priority with this site is being open and...