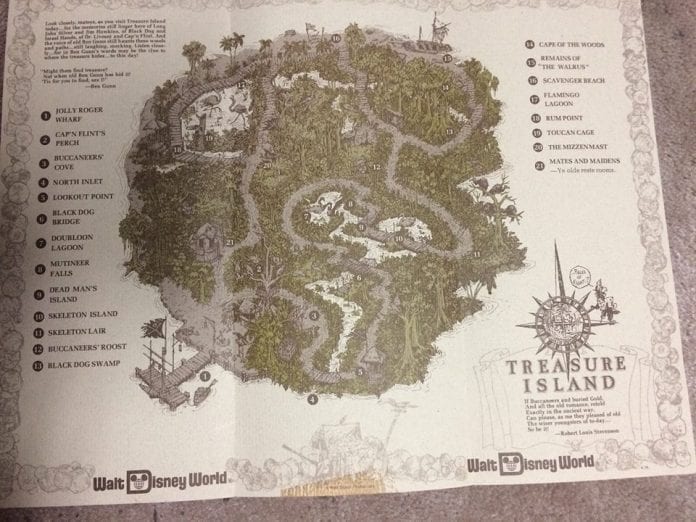 Disney is a place of constant development and and incredible innovation that very few places can truly display on such a grand scale. Unfortunately, as new technologies develop and new thought processes are developed a few things are lost along the way. So, today, we’re taking a closer look at Walt Disney World’s “Lost” island. 
As land was being gathered in secret for the large scale Disney project that would later become Walt Disney World, they acquired an island called Raz Island. For years, Disney never truly utilized the lands incredible potential, but in 1974 they developed a project called Treasure Island. By adding to the current mass of land, they slowly, yet surely created a small scale park which guests could visit exclusively by boat. The cost of entrance was just over $10 for adults and a little over $5 for children in the later years of it’s operation.

Of course, we’re talking about a “park” unlike the Magic Kingdom or anything of that nature, but rather more of a walkthrough type exhibit. Many of you may recognize the island by it’s later name, “Discovery Island.” The experience was unlike anything Disney had embarked on before end brought real animal exhibits, simple theming, and an observation area all together to create something neat for families of all ages to enjoy. (Original Treasure Island Map: 1974. Special thatks to Michael Dreitlein for this and the images below!) All things considered, the island encompassed just over 11 acres of land and could be viewed by guests from surrounding resorts and even over at the also extinct River Country water park. (Learn more about that here in an older article: A Look Back at the Only Forgotten Walt Disney World Theme Park – River Country) The area featured a variety of animal exhibits including: swans, a trained bird show, lemurs, cranes, flamingos, tortoises and many more. Beyond the animals, a private beach offered guests the opportunity to walk along the shore (no swimming allowed), paths traversed the island, and the entire experience revolved around an iconic yet simple pirate theme which was later lost from the experience.

Unfortunately, despite very little explanation, Discovery Island closed to the public in 1999 shortly after the debut of Animal Kingdom (which also features a “Discovery Island”). At one point the focus of the experience turned to conservation and while it was good in concept, Disney faced issues claiming that certain animals were being kept in restrictive housing and treated quite poorly as well. Of course, there is very little way to know how true these claims were (especially considering they were acclaimed by a zoological foundation), but either way, a majority of the animals were relocated to Animal Kingdom in time. Quite possibly the strangest portion of the closure is that the area has been largely abandoned for quite some time in a similar fashion to Disney’s River Country. Years ago, a somewhat brave (if you want to call it that) group of “explorers” dove in and swam a section of the lake to get a peek at what was left on the island. To their surprise, old pictures, theming elements and much of the area were left virtually untouched. There’s no way to truly prove their findings, and it is incredibly dangerous to try to get to the island yourself (they were banned from WDW). However, if you take a boat over to Fort Wilderness, you’ll float right past what is left of the experience. Rumors have been swirling for many years about a redevelopment of this space, but it will be interesting to see what comes next, if anything. Could you imagine the crowds something like this could draw today? It would be an experience that everyone would want to see first hand and could essentially change the vacation experience of many guests staying on property. For now, it’s simply fun to take a look back at a small portion of Disney’s history and appreciate the past that led the way to what we experience today. As always, thatks for reading, and have a great rest of the day! Did you get a chance to experience it first hand? Share your experiences with us on social media.