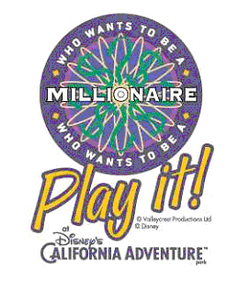 Today, as a slightly different take on our “Departed Disney” series we’re taking a look back at one of the more obscure attractions to ever be a part of the Walt Disney World Experience. Who “Wants To Be A Millionaire – Play It!” was perhaps one of the more unique concepts to ever debut at Hollywood Studios, but one that lasted a very short time.


In 2001, Disney debuted this seemingly creative attraction at likely the height of the shows many year recording run. As an attraction type show that involved the audience in a way that very few Disney stage shows have really accomplished, guests were pulled from the audience and brought on stage to “the hot seat” to compete in a variation of the hit TV trivia show.


Of course, guests weren’t chosen completely at random (due to many children being in the audience), but rather selected via fastpass surprise selection, picked out of the attraction queue, or simply by volunteering with a little bit of luck thrown in the mix. The guests which were chosen were seated in a special row of the theatre and then brought on stage if they were the first to answer a “fastest finger” question correctly.


The seating set up nearly replicate the actual production level set used for the tapping of the show, and really gave the guest in the “hot seat” an incredible iteration of the show without the risk/reward chances of losing and gaining money. Instead, guests won commemorative pins, jackets, shirts, hats, and much more depending on how far they made it through the show. The grand, 1 million dollar, prize alternative was a Disney Cruise given to the winning guest if they made it all the way through the entire show experience by answering trivia questions correctly. Of course, the entire attraction had very little to anything to do with Disney directly, but really immersed guests in that “Hollywood” gameshow experience at a time where Hollywood Studios at Disney was still known as MGM studios. While it really wasn’t an active set utilized for the TV production (as some were in the early days of the park), it was still an outstanding experience for guests and even got the audience involved through voting boxes attached to every seat in the theatre so that you could play along with the current contestant and see how you stacked up against other guests.


Personally, I absolutely loved this show. It felt like the real deal and was an environment that many guests really enjoyed seeing person. Today, after a complete overhaul of the attraction space, Toy Story Mania has taken over the location of this former attraction (which ended shows in 2006). What many guests may not realize is that the attraction actually had a Disney California Adventure iteration as well which operated in a similar fashion (although only for 3 year). Neither of these variations were perfect by any stretch of the imagination, but it’s interesting to see how the space has changed so drastically over time.

Did you get to experience this short lived attraction in person? If so, what did you think?
Thanks for reading and be sure to SHARE this article with friends! We truly appreciate the shares!

Collin Kendall - February 3, 2019
by: guide4wdw - Collin 5 Snacks Under $5 at Walt Disney World - Our Top Budget Friendly Snack Recommendations!   As many of you may already...