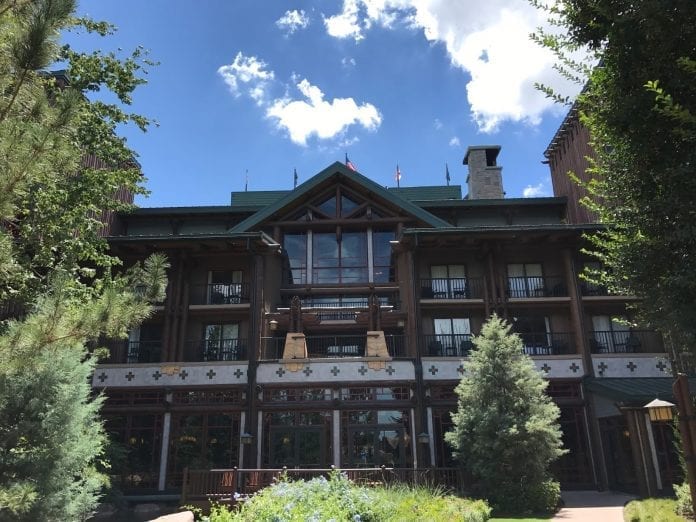 As the hurricane quickly approaches the Orlando area, a few unique circumstances have developed over the last 24 hours. Disney is making every effort to accommodate guests and keep everyone safe that could not get out or who have relocated to seek better shelter on Disney property that in their home towns. Intersting to note, Kristen Bell was one of the many guests who relocated to Disney property from another region of the state. Bell was in Fort Lauderdale filming for an upcoming movie as the storm started to slowly yet surely move towards Florida. So, with the help of the Swan and Dolphin resort on Walt Disney World Property (near Epcot), Kristen has found a great place to stay as Irma rolls through the state. While at the resort, she appears to be making the most of the situation and posted an image on Instagram calling numbers for a bingo game held for a group of elderly guests at the resort. These elderly guests were relocated to the resort for the duration of the potentially dangerous storms.

There are a few thousand senior residents who evacuated to our hotel. We are gonna make lemonade outta Irma as best we can and I’m fueling up the only way I know how in order to call a few hours of BINGO! #irma #hurricaneirma
A post shared by kristen bell (@kristenanniebell) on Sep 10, 2017 at 12:43pm PDT Moving back over to the Disney operated resorts, the situation seems to be unfolding better that Disney expected in regards to food. As of this morning, photos arriving across Facebook have shown that some resorts were able to provide a hot breakfast and even a hot lunch for guests in food distribution areas. The bag lunches are also available if guests would like to eat that instead. Overall, there’s quite a few options that were not originally guaranteed.


All things considered, Disney has made a great effort to prepare guests for the storms and even went as far as to provide an emergency kit with a flashlight, granola bars, and other snacks delivered to some resort rooms. Disney characters have also started appearing across the resorts. Big Al of the Country Bear Jamboree even made an appearance over at Wilderness Lodge! The governor of Florida has also required Disney and other hotel locations to allow pets within the resorts for their safety.


Things are going quite well for Walt Disney World in the preparation phase of this process that is rarely implemented, yet well constructed. If you’re at the resorts at this time, be sure to stay safe, but also make an effort to thatk and show appreciation for the staff on hand operating each and every one of these resorts as a “ride-out” cast. Most things appear to be going fairly well right now (all things considered) so we hope the trend reminds true as the potentially dangerous weather moves through.

After this whole situation passes, be sure to check out Destinations to Travel (clickable link) if you’re considering a trip to Walt Disney World in the future! Tell them Guide4WDW sent you in your message to help us out! Their services are second to none and have helped many guests in this incredibly unique circumstance. Quote request form below!