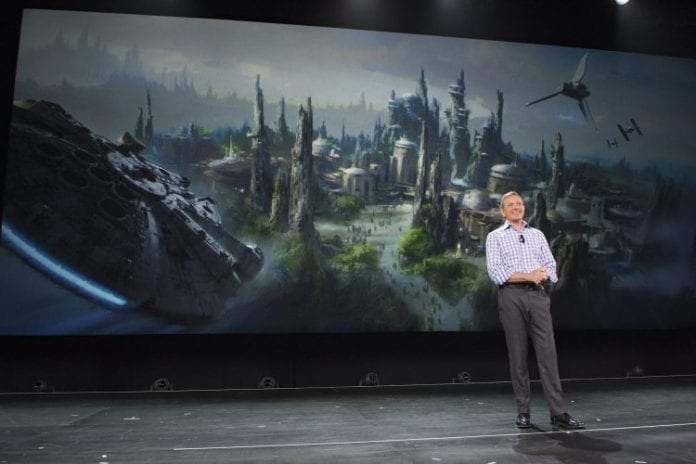 
As the debate and consideration of “who’s next?” continues to develop for the Disney organization at a corporate level, information was shared Tuesday morning that Bob Iger will in fact step down from his current role in 2019. The company recently extended his contract into 2019 after a successor was not named for the position as originally anticipated. However, it does not appear as if that will happen again. Iger debuted to the media at an event held by Vanity Fair that he is leaving for sure this time.

Of course, when the topic is brought up about a CEO stepping down, typically it does not mean they will leave the company right away. In this particular case Iger will be around for 3 more years in order to guide the organization from a different role. The question that pops up as a result is, “Who will take his place?” Mass speculation has pointed to a variety of different individuals within the company and beyond including: Bob Chapek (Chairman of Walt Disney Parks and Resorts), Facebook’s Sheryl Sandberg, ESPN’s John Skipper, and many others. At this point no one seems to know a definitive “top pick” but Iger will certainly be hard to replace.


As a true creative business genius, Iger has brought Pixar, Marvel, and Lucasfilm into the Disney intellectual property realm. He certainly isn’t perfect and has focused largely on intellectual property rather that many other aspects of the organization. Even taking that into consideration he has been incredibly successful in nearly all of his endeavors as a leader of this company we all know and love. To be quite honest, he’ll be incredibly difficult to replace.


Personally, I’d love to Chapek earn the title of CEO. To me, he seems like an individual who truly appreciates the Disney parks and resorts in a way that many executives don’t entirely grasp.


Speaking of parks and resorts, be sure to check out the new discount rates for early 2018 by clicking the following link or by contacting Destinations to Travel using the quote Request form below this article. We appreciate the support and it costs you nothing extra to utilize their services while supporting the site.

If selected, Chapek’s role could potentially be huge for the theme park segment. While I have yet to meet him in person (I’d love to one day), he’s stated many times in interviews that he believes in the “Disney bubble.” Honestly, that concept alone could be huge for the company. The idea that a CEO could and would focus on the little details and the immersive experience in the parks, in regards to guest interaction, is something that could continually set the company apart and get it back to it’s peak customer service roots. Of course, this is simply my own opinion, but it really is the little things that make the biggest difference over time. A CEO with true parks experience and knowledge could vastly alter the “climate” and future of not only Walt Disney World but the Disney parks as a whole in time. Today, expansions are well under way, but Chapek’s influence on projects like Pandora tend to set him apart from all the others in my mind. I’m certainly biased towards the parks and resorts segment, but seeing how large scale projects like Pandora, Toy Story Land, and Star Wars: Galaxies Edge, continue to exceed expectations (even before two of them have completed construction) is an incredible representation of his “Disney bubble” mentality.

So, who do you think should be next, or better yet, if the sky was the limit, who would you choose as CEO? Share your thoughts with us in the comments on your favorite social network!