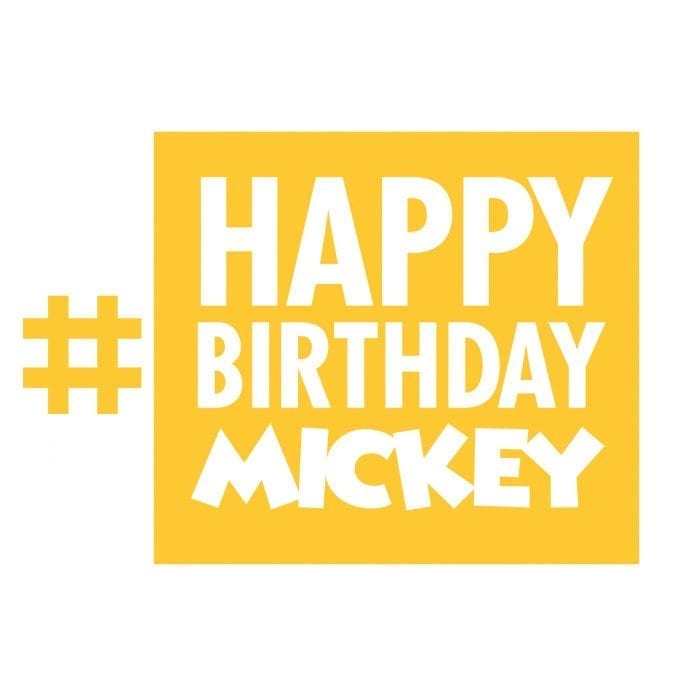 
On November 18th and many other surrounding dates, Disney has announced that Mickey will be celebrating his birthday in a big way! Disney officially celebrates Mickey’s birthday year after year in commemoration of his first theatrical appearance in Steamboat Willie which debuted November 18, 1928. From that point, Mickey Mouse turned into a household name across the nation and largely around the world. So, as a result, Mickey will be making special appearances in the parks, Disney stores, and on Television networks across the world! At Walt Disney World, on November 18th, cast members will be handing out special buttons for the occasion (as seen below) to each and every guest. The buttons will also be passed out in Disney stores and at Disneyland. At Magic Kingdom, a special song will be performed during the Move It! Shake It! Dance and Play it! show. Beyond that experience, special merchandise, limited time offering food, and and photo opportunities will roll out for the occasion.


Out at the Disneyland Park, a special cavalcade of Mickey and the Disneyland band will roll out for this one time event. While we know very few details of these in-park activities, I’m sure they’ll be popular among guests and create a unique memory for many. Over on the Disney channel, a special marathon of Mickey and the Roadster Racers and Mickey Mouse Club House will run during the weekend of November 17th. On Mickey’s actual birthday, the channel will also debut Mickey Mouse shorts every half hour.


Be sure to watch Disney’s online media avenues: Oh My Disney, Babble, and any other sites featuring the Disney name for unique one time giveaways and special content throughout the birthday celebration. On November 15th, be sure to catch Good Morning America for what Disney is calling a few special surprises which will debut on their morning show. (I’m hoping we’ll get some more details on the Mickey themed attraction replacing the Great Movie Ride – However, that is simply rumor at this time.) Along the way, Mickey will head out on a journey across the world to 8 different locations including Japan, Chile, Canada, China, England, and of course the United States! If you’re participating in any of these events or just want to wish Mickey a happy birthday, Disney is encouraging the use of #HappyBirthdayMickey on social media.


A special thatks to Destinations to Travel for sharing this info with us today! If you’re looking to book a Disney vacation, be sure to check them out utilizing the quote request form down below. Not only will it help support the site at no additional cost to you, they may even find a way to save you some money along the way. Thanks!