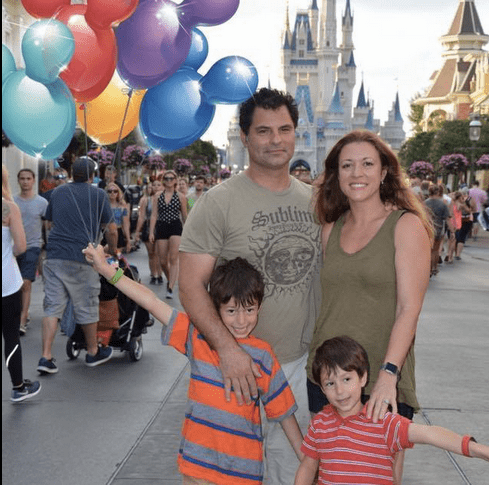 Every once in a while you hear a story that changes your mindset, often for a few minutes, but sometimes for a lifetime. Today’s article isn’t what we normally share, but rather a story of a friend that took a leap of faith and turned a Disney dream into a reality. Lisa, thatks for sharing your incredible story.

Originally published by Lisa DiNoto Glassner at thecastlerun.com on October 25, 2017

“Just put a date on the calendar. I don’t care if it’s two weeks from now or two years from now. Just put it down. And then spend whatever span of time exists between now and then wrapping your head around this. Because it’s going to be hard.”

But I’m getting ahead of myself.

I graduated from Harvard Law in the spring of 2004, bright eyed and ready to throw my type A personality into a world of corporate law where I’d perhaps spend forever or perhaps spend a brief amount of time. I was looking forward to being still in one pursuit and actually didn’t choose one particular very prestigious law firm because they asked me, at the interview, what my plans were for after I’d leave them. (Of course the fact that an associate there cried during his interview of me didn’t help either….) I packed up my things in Cambridge, said lots of tearful farewells, and was moved by my chosen firm into my new apartment in NYC – which I shared with a dear law school friend whom I would almost never see because 99% of my time would be spent in the office.

Then life started to happen.

Truth be told, I loved aspects of what I did. Playing with the English language was always my jam. I dare someone to give me a mathematical formula that I can’t memorialize in contract-speak. The people were brilliant. The deals were bigger that my young self could wrap her head around. I worked so. damned. hard. and I was proud of the work that I was putting out and the respect that I was getting. But it didn’t fulfill me and when you’re billing 400 hour months, you’re screwed if it doesn’t fulfill you. I envied the people that were fulfilled. It would have all been so EASY if I was fulfilled.

I met a wonderful man. He had a lucrative trucking company but had regrets about never dedicating himself to academics. And we had the means! If we had anything, we had means. So we committed to each other and he enrolled to finish his degree. We got engaged. We left Wall Street for DC. I took the Virginia bar and started a new practice at a new Big Law firm. The people were still brilliant. I was still proud of the work that I was putting out. But it still didn’t fulfill me. I still envied the people that were fulfilled. I was mentored by a wonderful, powerful, brilliant woman who was killing it in partnership. She seemed to outsource everything else in her life and was okay with it. I wouldn’t have been. Because the work itself wasn’t enough.

I know that the idea of being “fulfilled” is eyeroll inducing. I was raised by a father who told me to be grateful that I had work. And he was right – in a way. And to the degree that he wasn’t it didn’t matter because he was my dad and that was how I was raised. I had gone to Columbia and Harvard. I had a “great job”. My qualms about it must have been wrong. I was lucky and my internal dialogue must have been wrong.

I wasn’t getting any younger and I didn’t want to hold up the rest of my life while I figured out this pink elephant in the room, all consuming detail. We bought a house and had two children that were (and still are) my world.

But then my dad got sick. Shortly after the birth of my second child, he was diagnosed with acute myeloid leukemia and life as I knew it stopped. The nightmare started. There were no down times in my father’s fight against cancer. There were no quiet moments of togetherness. Acute leukemia in a sixty-something man is not a gentle disease. Over the course of 10 months I mothered my two young children, supported my family financially in corporate law, tried to support my mother emotionally and mentally, and screamed alone in my car while beating the steering wheel. Those 10 months were the sort of time that people on the outside look in on and say they “don’t know how you survived”. Like anyone in that sort of situation, the answer was that survival was the only option. I worked. I cried. I took care of my kids. I tried to be a good wife. I answered calls from my delirious father at 3 a.m. yelling that I’d abandoned him in the hospital and “WHY WASN’T I COMING TO GET HIM???” You just survive. You wake up in the morning and you do whatever you need to do to haul yourself and the people that you love through the day.

I used every tool I knew to keep a clear head. I ran. I meditated. I ate well. I meditated more. I ran more. And more. I ran until the chaos went away. I had never been a runner. But I ran because it was all that worked.

On February 20, 2014 – incidentally my 36th birthday – I got a call from my mom and my father’s oncologist. They were together in his office on speakerphone. The oncologist didn’t mince words.

“We are no longer prolonging your father’s life. We are prolonging his death.”

I was an only child. I was the decisive one. I had written my father’s advance directive. I had not one shred of doubt.

We did the terminal extubation the next day.

They gave him morphine for hours. When they pulled out the tube the sound was horrible. Something inhuman came out of my vocal chords too. I remember it vaguely. I remember falling. Then I remember standing back up. It was a moment of falling apart I’d allowed myself. Then I stood back up.

We started picking up the pieces. I kept working. We waded through the death-related mass of paperwork.

We started going back to Disney with the kids. My heart sang when I was there and ached when I left. I found out about a half marathon there that was exactly 2 years after the date of my father’s death.

On February 21, 2016 I ran the Princess Half Marathon in Walt Disney World. It was my f- you to the universe. I was still kicking. It was everything that I hoped it would be. And then it was over and I went home. And I kept working. And I started to crumble inside.

My husband had finished his degree in mechanical engineering. No small feat for a man who’d reentered the academic world in his 40s, surrounded by kids who’d been raised on computers. He’d tried a responsible government job at the patent office. Then sales engineering. He could have made it work but none of it felt like him. He didn’t belong behind a desk. To an extent, trucking *had* been him. Now he had his degree and we knew what he was capable of but we also knew what felt right. The wheels started turning. Pun sort of intended.

Then I came home from that race and I kept working. And I crashed. I’d run the half. I’d said my f- you to the universe. But nothing had changed. I got on the phone with one of my best friends.

“No. You’re not. You hate where you are but you’re not going to be  able to change it like that.” No matter how much I hated it, it was still a huge part of my identity. It was also how I put food on the table.

I had the fateful conversation with my friend. Put a date on the calendar and spend the time between now and then coming to terms with it and preparing financially. I wrote August 11th on the calendar. I bought my husband an 80-foot long car hauler. He went on the road. I took care of the kids and kept working. I banked every penny.

On July 28, 2016, I gave notice. I fought for my decision with the partnership for hours. I turned down the idea of a sabbatical because I knew I wouldn’t start to heal without a clean break. They said I would be miserable. I didn’t want to admit to them that I already was.

Ultimately I stretched my remaining time with the firm out for a bit to try to ease the transition. My last day of work was August 22, 2016. I came home and packed and we went to Disney later that week.

The process of detoxing from a life in Big Law is a subject for another day. The months following my exit were, and still are, the sort of soul searching difficult that does not sum up tidily or easily. I had ups and downs. I purged my house. I kept running. I started to allow myself to daydream about what might be next. Suffice to say that after 13+ years in Big Law and everything else that those years encompassed, and with a dear husband who is now more often that not on the road for work, we found ourselves fully portable from a work perspective, staged and sold our Maryland home, and built a house in Florida immediately north of the Magic Kingdom.

Because when you are forced to wake up to how short life is, following your joy starts to make a lot more sense.

This post was originally published on October 25, 2017 by the author, Lisa DiNoto Glassner, on her blog, thecastlerun.com, where she shares the details of family, food, Disney, running, and life’s other leaps and hiccups. You can also find Lisa on Facebook Here and on Instragram @thecastlerunner. Her Etsy shop for custom glassware, race decals, and other items is at etsy.com/shop/thecastlerun.

Any and all rights to this post, in whole and in part, are retained by Lisa DiNoto Glassner and her website, thecastlerun.com.
So, today was a bit of a change of pace. It was a break from my typical posts to bring Lisa on to share her incredible story. If you enjoyed this post, be sure to head over to her facebook page and tell her how much you appreciate her sharing it with us today. For many, this story will hit home in their own lives, but for others it may just be the inspiration needed to take that first step towards a lifelong dream. As always, if you like today’s article, please share it with friends! Thanks for reading.