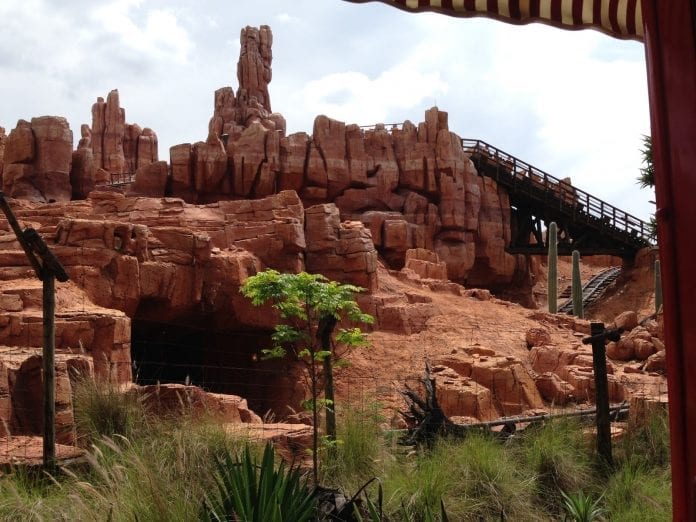 When it comes to attraction stories, there are very few as versed and intricate as the backstory of Big Thunder Mountain Railroad. While the physical history of the attraction isn’t all that long or all that short, the backstory of both the attraction’s creation and it’s physical build is one that gets largely overlooked by a vast majority of guests. Big Thunder Mountain is undoubtedly a true guest favorite attraction and it truly is one of the staples and landmarks of any day in the Magic Kingdom. However, many guests miss out on what’s hiding in plain sight. According to Thunder Mountain lore, largely spun by the incredible folks over at Imagineering, Barnabas T. Bullion runs Big Thunder Mining Company. The man himself is obsessed with prospecting gold and believes that it’s his inherent goal in life (as a result of his name) to find a large sum of gold. Thunder Mountain and the gold it holds within is known by locals to destine anyone to failure who attempts to mine the riches within the mountain. However, despite massive failure time and time again, the Big Thunder Mining Co. continues to operate and attempt to harvest the gold within despite massive tragedies and unnatural occurrences.

Diving a bit deeper into the story, I man by the name of Jason Chandler lived in the vicinity of Big Thunder Mountain, and created an elaborate drilling machine. One day, when a random cave-in occurred during a mining operation on the mountain, Chandler came to the rescue with his machine saving the lives of miners buried deep within the mining operation. Unfortunately, as the rescue effort drew to a close, and was largely successful, a freak incident proceeded to bury Chandler deep beneath the surface. Surprisingly, Chandler survived the incident and lived on to tell the tale despite never returning to the mine. Instead, Jason decided to move his contraption to a new location in search of a better life and scientific discovery. In real life, Jason Chandler’s story, developed by Imagineering, was designed to be carried out in a land called Discovery Bay which was never unveiled to guests at any Disney Park in full scale. The land’s concept was essentially scrapped. However, this simple story adds an element to the Big Thunder Mountain experience that many guests entirely overlook. The unique part about this story is that it is continually progressing as time goes on and establishes a connection to The Society of Explorers and Adventurers at Walt Disney World.


For those of you who may not know, the Society developed in the rather early days of Walt Disney World, but has been re-emerging in a rather strange and hidden way over the last 5+ years. Personally, I see it as a developing concept the could revolutionize the backstory of not only Disney attractions, but potentially lead to an unexpected surprise in the Disney company in the coming years. But, with that being said, I devoted an entire article to that thought a while back which you can check out in depth – Could The Adventurers Club be Returning in an Entirely New Way?


In the more realistic aspect of the Disney parks, Big Thunder Mountain Railroad has a backstory of how it came to be that is often entirely overlooked as well. Beyond the typical lore of Disney backstories Thunder Mountain has a hidden history embedded in it’s construction and conceptual renderings that vastly out paces the thought process that goes into many attractions today. The idea originally developed in a round about way as the large scale plans for Thundermesa were essentially shelved indefinitely when financial problems presented themselves in the conceptual phases of the project. The original Thundermesa concept was developed by none other that the legendary Marc Davis. Building on those early concepts, years later, Tony Baxter brought an iteration of Davis’ original ideas to life in the form of Big Thunder Mountain. While the concept wasn’t entirely similar, and a much more scaled down iteration of the project, it allowed a small part of the Thundermesa project to debut for guest enjoyment. To me, it’s a fitting representation of a culmination of efforts and the results and guest satisfaction truly speaks for itself. Thunder Mountain Railroad has truly stood the test of time, and while the story behind the attraction has varied slightly over the years and iterations of the attraction, it’s interesting to note how prominent this attraction truly is and the legendary status it has grown to encompass.


Your Thoughts
As always, if you have thoughts, concerns, questions, or even some tips of your own to share, don’t hesitate to reach out to us on Facebook or your favorite social media platform. Give us a follow while you’re there, and we’ll keep the conversation going in the future. We’re not the largest Disney community, but we’re one that’s there and one that listens. Thanks for reading and have a wonderful day wherever you are!


Ready to Plan?
Need help planning your vacation? Let our friends over at Destinations to Travel (FREE – no obligation quote request form below) help you out at no additional cost to you! Their services are free and a great way for you to help out the site at no extra cost to you! Here’s a closer look at why I recommend an Authorized Disney Travel Planner!