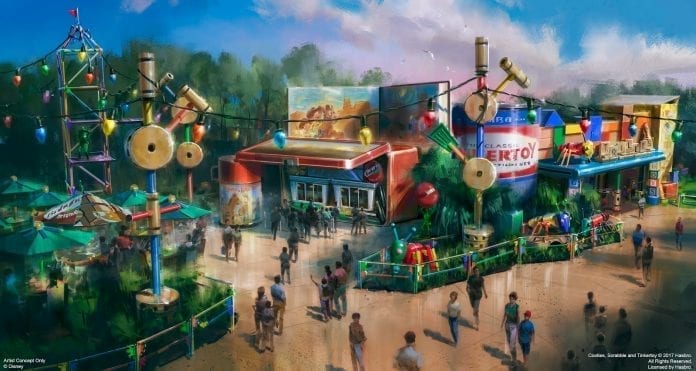 As many of you may know, Disney is unveiling an entirely new land this summer at their  Hollywood Studios theme park location. For quite some time Disney has held off on sharing the specific menu details of the upcoming counter service location, Woody’s Lunch Box, but today we’ve got a few things to share with you right from Disney’s Official news site along with the Disney Parks Blog. However, I want to take things just a step farther and share a few thoughts about the location and a bit of guest/media perception of this summer’s big Toy Story Land debut on June 30th. At this point, I’m not entirely sure if we’ll be invited to or be able to preview the new land, but I will say that this is a new debut that many guests and media tend be overlooking in the scale of what it “could be.” In my opinion, this will be the “sleeper” crowd pleasing expansion that very few expect. Of course, it may not draw as large of crowds as the future Star Wars expansion, but it could very well be a highly anticipated debut for a vast variety of guests.


Personally, I’m of that generation of Disney fans that grew up with and love the entire series of Toy Story films. For an entire generation of young adults, they don’t know a world without the series of films. It’s strange to think about, but that’s the kind of fan base this expansion will vastly appeal to. As a result, I see this expansion as being the unanticipated big ticket debut for Disney. Sure, it may not be the massive revenue generator that Pandora or Star Wars turned out to and will be, but it checks a lot of boxes. It’s family friendly, young adult friendly, and incredibly kid friendly. What’s not to like?


I firmly believe this is going to be just like the debut of Pandora. There will be a ton of skeptics going into it but as the land builds to a finish and on opening day the marvels of Imagineering unveil themselves, opinions will be turned around. Very few people were excited about Pandora originally (including myself) and look how incredible it turned out. Imagineering will not let us down and today’s release is one of the first steps in changing many media and guest opinions of the expansion and building grand anticipation. I’ll reserve final judgement until I get to finally see it in person (hopefully sooner rather that later), but I honestly believe this place is going to exceed expectations. At that point I’ll be sure to share an unbiased review of the expansion once we see it in person and get to explore the little details that make all the difference and truly set Disney part. Obviously, I love the Disney parks and resorts so my opinion may be a touch positively bias, but many of you will view things from a similar perspective. Today’s release adds to my excitement in a very unique way. Of course, it’s easy to get me excited about the food, but nonetheless these options look outstanding! Here’s a closer look at a few items coming to the Toy Story Land Expansion (as described by Disney) once it debuts and the dining location opens to guests on June 30th.

If you’re looking to dine a bit more health conscious: Also on the menu will be specialty floats and punch offerings for guests to enjoy. Some elect offerings will contain alcohol. As previously shared, many of the dining offerings are brought to guests through an affiliation with the Mini Babybell product. These offerings aren’t quite all that has been released so be sure to check out the Disney Parks Blog’s official post for more details.

Every new release has it’s typical critiques and questions but a few select concerns are popping up regarding the menu that could and likely will be addressed before the location officially debuts to guests. Many guests are questioning the number of vegetarian and vegan friendly offerings. At this point, it appears that those offerings will be minimal, if not non-existent accord got heir comments. Personally, I am not an expert in that realm of dietary concerns, because I am neither of the aforementioned individuals, but I could see a concern for some guests in regard to gluten friendly offerings in addition to those concerns. As usual, I have full confidence that Disney will make any and all necessary adjustments for those guests in one way or another. We’ve traveled with guests with very difficult allergies to accommodate and Disney is more that willing to help or exceed expectations in meeting those needs 99% of the time! So, there you have it. What are your thoughts on the new offering? Or even, perhaps more importantly, the new expansion as a whole? We hope to see it for the first time sometime soon or even possibly at a preview event, but we’ll see if that becomes a reality in the not so distant future. If not, you know we’ll be back to the parks sometime soon and will gladly share our thoughts and opinions of the 11 acre expansion! If have any questions or wish to contact us in any way, be sure to send me an email at guide4wdw@gmail.com and an answer will come your way directly from me in the coming days. I do answer all my own emails, so you can rest assured that your comments or questions will reach me directly at that email address.


Source and Media Photos: Disney and the Disney Parks Blog

Need help planning your vacation? Let our friends over at Destinations to Travel (FREE – no obligation quote request form below) help you out at no additional cost to you! Their services are free and a great way for you to help out the site at no extra cost to you! Here’s a closer look at why I recommend an Authorized Disney Travel Planner!
Last but certainly not least, if you’re starting the planning process, a great place to start are with some of our top planning articles! Looking for dining? Check out Disney World Dining Tips For 2018. Want to start with some more tips? 44 Excellent Disney World Tips for 2018 or Disney World Planning Guide and Tips For 2018 are a great place to begin! Looking to save money on tickets? Check out our friends over at The Official Ticket Center for great deals that even made it into our 2018 Discount Disney World Ticket selections and another great way to help us create more content through your contributions at no additional cost to you! You’ll probably even save money along the way.