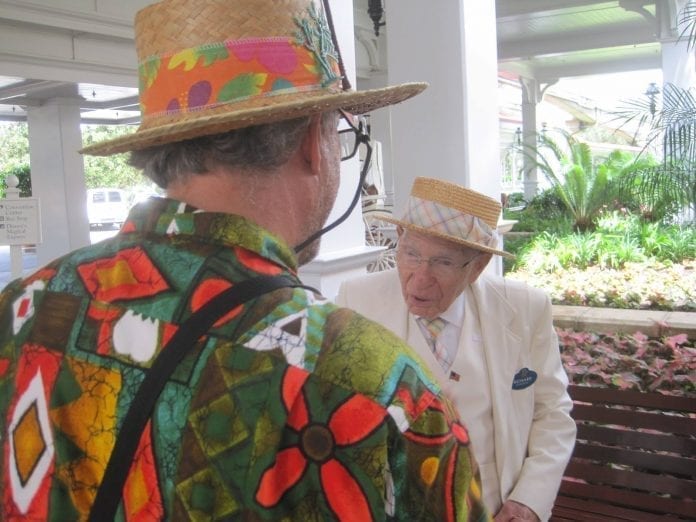 Today, I’m sad to share that legendary cast member Richard Gerth has lost his fight with an illness at an advanced age. Richard was 92 years old, but age was nothing but a number for him and his impact on guests day after day. He was and always will be the face of the Grand Floridian and that welcoming smile that greeted thousands of guests year after year. While this isn’t good news in any way, I share this post for a few reasons. First, I want to create a place where you can share your memories through photos. I don’t want this to be an article that ruins your day, but rather one that makes you remember the memories he helped so many of you create over the years. If you want to share a photo here, feel free to share it with us on social media and we’ll happily add it to the list. Let this be a place to share the moment and create a list that brings a smile to the face of everyone who reads this post.


Richard truly was an icon of the Grand Floridian and one that has left his mark in so many incredible ways. By helping guests and creating that Disney magic we’ve all grown to love, Richard was a person who embodied what a cast member should be. He was a man that I know Walt would truly appreciate and one that made a difference for so many guests. Many guests thought of Richard as a part of their family and have created traditions centered around simply meeting the man year after year. He was, for lack of a better word, an “attraction” of the Grand Floridian and one that will be completely and entirely missed.


The second reason I share this post is to share a personal story. If you read one of our recent articles, you likely saw where I touched briefly on this story. In August of last year I shared the original article (listed in full) below. After a couple of hours of the post being live on the site a reader dropped a comment on Facebook mentioning that they were at the Grand Floridian and he happened to be there that day. Then they took things a step farther in what is still one of the more memorable gestures I can recall that any reader has done throughout the life of the site. They took this article and read it aloud to Richard and they happened to mention that he had a smile from ear to ear as they read. It seems so simple but it’s one of the greatest highlights I’ve had in this writing journey. It wasn’t that fact that I happened to get lucky and make a difference to someone, but rather that this community of Disney fans could reach that far and create such a last memory for both me and hopefully the reader along the way. It may have brightened Richard’s day in a little way, but it was completely unexpected that he’d ever even get the chance to see the article. Truth be told, the little moment likely put a larger smile on my face that it did Richard’s. That’s the key to it all though. Richard was a man that created a moment for guests that they would remember and took an incredible pride in doing so day after day. That’s the true spirit of Disney and one of the many reasons his daily presence will certainly be missed.


Here’s a few photos from our readers and if you want to add yours, send them our way and we’ll get them added to the list. I’m finishing off the article with this because I always want to try and bring a smile to your face when you read these daily (well almost daily) articles. I don’t want this to be a sad part of your day but one where you can remember the memories spent at this place and hopefully those memories will bring a simile to your face! Each of these photos are from our readers, and I can’t thatk you enough for allowing us to use them. Don’t forget to check out the original article featuring Richard below the photos! Earlier in the week we debuted an entirely new series here on the site we’re calling “Legendary Cast of The Disney Parks.” After great feedback and a few particular requests, tonight we’re back with an entirely new cast member from the growing list. This particular individual just goes to show that no matter what your role is at Walt Disney World, you can create incredible and timeless guest experiences each and every day. As you’ve likely already figured out from our title, today’s cast member spotlight takes us to the Grand Floridian and the iconic Richard Gerth. Richard has been a part of the magic for many many years and greeted thousands upon thousands of guests from around the world.

Richard has become a true icon of the Grand Floridian that guests of all ages can truly appreciate and share a moment with. Above all else, he’s a smiling face welcoming you ‘home’ in a way that can’t be faked. You can tell without a shade of a doubt that he loves his job and while he’s 90+ years old, you can honestly tell that each guests experience is important to him.

If you want to meet Richard for yourself, head on over the lobby of the Grand Floridian and you’ll likely find him greeting each guest as they enter the building. He’s certainly not hard to spot and typically dressed to the nines in classical Grand Floridian style. He’s truly spent years in his position, and created a lasting impression on guests each and every day. After working in the position for over 20 years, guests of all ages scramble to see him during their time at Walt Disney World. Personally, I can’t say that I’ve ever met Richard (beyond videos and online write ups) as much as I’d love to do so at some point. Unfortunately the timing has never quite lined up, and according to various sources his days off are typically Wednesdays and Thursdays. As an additional role of his position, he does also help with Disney Fairytale Weddings in many cases. He’s truly become iconic in this role as well, even going as far as being featured in mass bridal photos. So, if you can’t find in him the lobby, don’t worry, he may be out working a wedding.
As a result of his incredible commitment and lasting influence on guests, Richard received the Disney Legacy Award in 2013. As many of you may or may not know, the Disney Legacy Award is one of the highest awards that can be given to cast members. If you’re in the parks, a signifying trademark of the accomplishment is a blue Disney name tag. It’s a subtle difference, but if you ever see an individual wearing one of these tags, be sure to tell them thatks. Without a doubt, they’ve put a lot of heart and certainly a lot of time into their role in the parks and beyond.
So, next time you’re over at the Grand Floridian, be sure to keep an eye out for Richard. If you’ve met him before and have a fun picture of him or with him, be sure to share it with us on your favorite social media platform! If we can get enough guests to share photos, we’ll add a few here in the article!
Thanks for reading, and have a great rest of the day! Also, be sure to share with us what cast member you would like to see featured next. Many of these individuals really never get the credit they deserve.

As always, if you have thoughts, concerns, questions, or even some tips of your own to share, don’t hesitate to reach out to us on Facebook or your favorite social media platform. Give us a follow while you’re there, and we’ll keep the conversation going in the future. We’re not the largest Disney community, but we’re one that’s here and one that listens. Thanks for reading and have a wonderful day wherever you are! My email is always open, so don’t hesitate to send a question or feedback my way! – guide4wdw@gmail.com