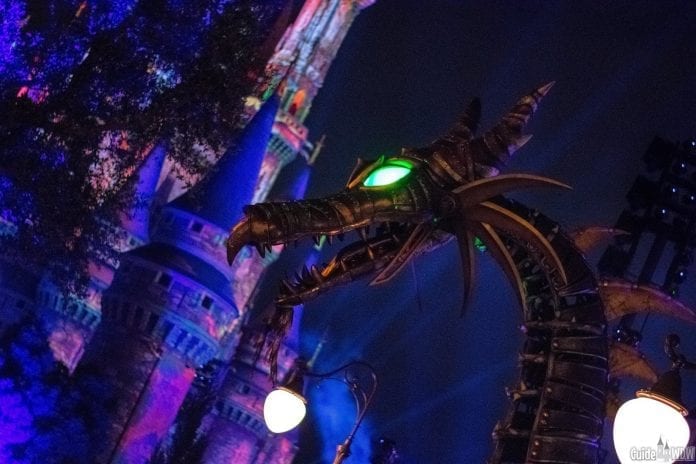 Disney’s Villains After Hours Event – Should it Be On Your List This Summer?

Last night was a surprising night in so many ways. If you follow our social media pages, or have joined our Facebook group to add to the conversation, you’ve likely seen us share the latest new experience for the Disney Parks this summer, Villains After Hours!
If you follow Disney content, you probably already know that Disney teased this event in a big way back a few short months ago when they debuted a short teaser of Maleficent breathing fire at night. Immediately that peaked my interest and ultimately became the driving factor for me in booking this event and putting out the money to make this experience a reality.

I share that for a few reasons. One is the fact that the ultimate vision and goal of the night for me was to catch Maleficent breathing fire with a near pitch black background! Second, I mention that because I do want it to be known that we (Caitlin and I) did pay for this event out of pocket so we really can go at this from the perspective of someone “in your shoes” looking to pay the retail cost of the event. That retail cost isn’t cheap by any stretch of the imagination. At a $139 advanced purchase price, a day of price of $144, and an Annual Passholder discounted price of $109, this is not a cheap event. However, I still put forth the argument that it is more that worth the cost if you’re going into it with the right expectations.
The dates really are all across the board this summer and are currently listed as the following on the Disney Parks website:
Disney Villains After Hours takes place from 10:00 PM to 1:00 AM on the following dates:
In total this shakes out to 9 more dates after last nights first event. Of course, this all begs the million dollar question, should you go? My immediate answer is yes but I do say that with a slight hesitancy. I loved the event but it was largely due to the expectations I had set for myself. I went into this hoping to do the special things associated with the event that I couldn’t do any other time and that worked out perfectly. Honestly, I loved this event. There were parts I didn’t love but overall I was thrilled most of the night. If you’re going strictly for attractions, this one may not be for you. The stage show is a bit long and eats into your time a little bit but it is worth watching a least once. For a three hour event you really have to prioritize what you want to get done to really have a near perfect experience but no matter what you are going to have a good time at this event!

You can get into the event at 7:00pm with any ticket but if you were there ahead of time, you could actually check in for the event far earlier and merchandise started rolling out early as well. If you knock the merchandise out early on it will save you a good amount of time after the event officially begins.

Throughout the night, Magic Shots were fairly plentiful with Photopass scattered around the park and a few of them were really really unique. While we didn’t quite get to all of them, we snagged a couple from our friend Lisa over at TheCastleRun.com to complete the vast majority of what was offered during the event. The odd thing about these were that they were not marked on the map. Instead, you did have to wander a bit to find them but most were in fairly obvious locations that were quite easy to stumble across as you traversed the park.
Here’s a few of our favorites and a set or two we grabbed with our friend Michael of TheMovingPlatform as well. Overall, the Magic shots were great and a highlight of the event in my opinion!

Moving on to the event specific entertainment, the true environment changing aspect of this event was the constant music and live DJ filling the hub area with an array of music bringing an incredible “life” to the event. All night long, the upbeat DJ blew away expectations, and really brought the hub to life in front of the castle which was decked out in a villainous projection all throughout the night. It was a look for the castle that I had honestly never seen before! The actual show itself, which Disney appropriately called Villains Unite the Night, took to the stage at 11:00pm, 12:00am, and 1:00am. Personally, I felt the show was a bit long, but it was really cool and brought a ton of unique effects into play as the villains took to the stage and brought to life a loose plot that was full of action and even a few pyrotechnics along the way!

This was, without a doubt, the highlight of my experience at the event. As previously mentioned, my goal for this from the very beginning was to capture a fire breathing shot of Maleficent in the hub at night! There is no other way to capture a shot of her at night and man did this experience meet expectations! From the ominous music to the multiple bursts of fire, it was everything I had hoped it would be. In my opinion, this alone is worth the cost of admission, especially if you’re into photography!


What else can I say? Who doesn’t love a massive fire breathing dragon creeping its way through a near empty Magic Kingdom blowing 20 foot pillars fo fire! This undoubtedly puts the Festival of Fantasy iteration of this float to shame and kicks up the immersion factor in a way that can only be felt and in no way can be described in words. There’s no doubt in my mind that Maleficent is at her finest during these events!  In every way, shape, and form, this was the highlight of the event and has been for everyone I know that attended! The merchandise was excellent and far exceeded my expectations (which were admittedly low). I caved and bought one of the tumblers being offered for sale and I don’t regret it at all! To my surprise the merchandise was heavily guarded before the event officially began but was on sale very early in the night to guests who showed their band to the cast guarding the displays which were quite literally roped off!
I’ve never seen this level of defense around merchandise for events, and much of it was limited in the amount that each guest could purchase. Everything was well stocked and ready to go and all the cast seemed pumped just to be there for the event! 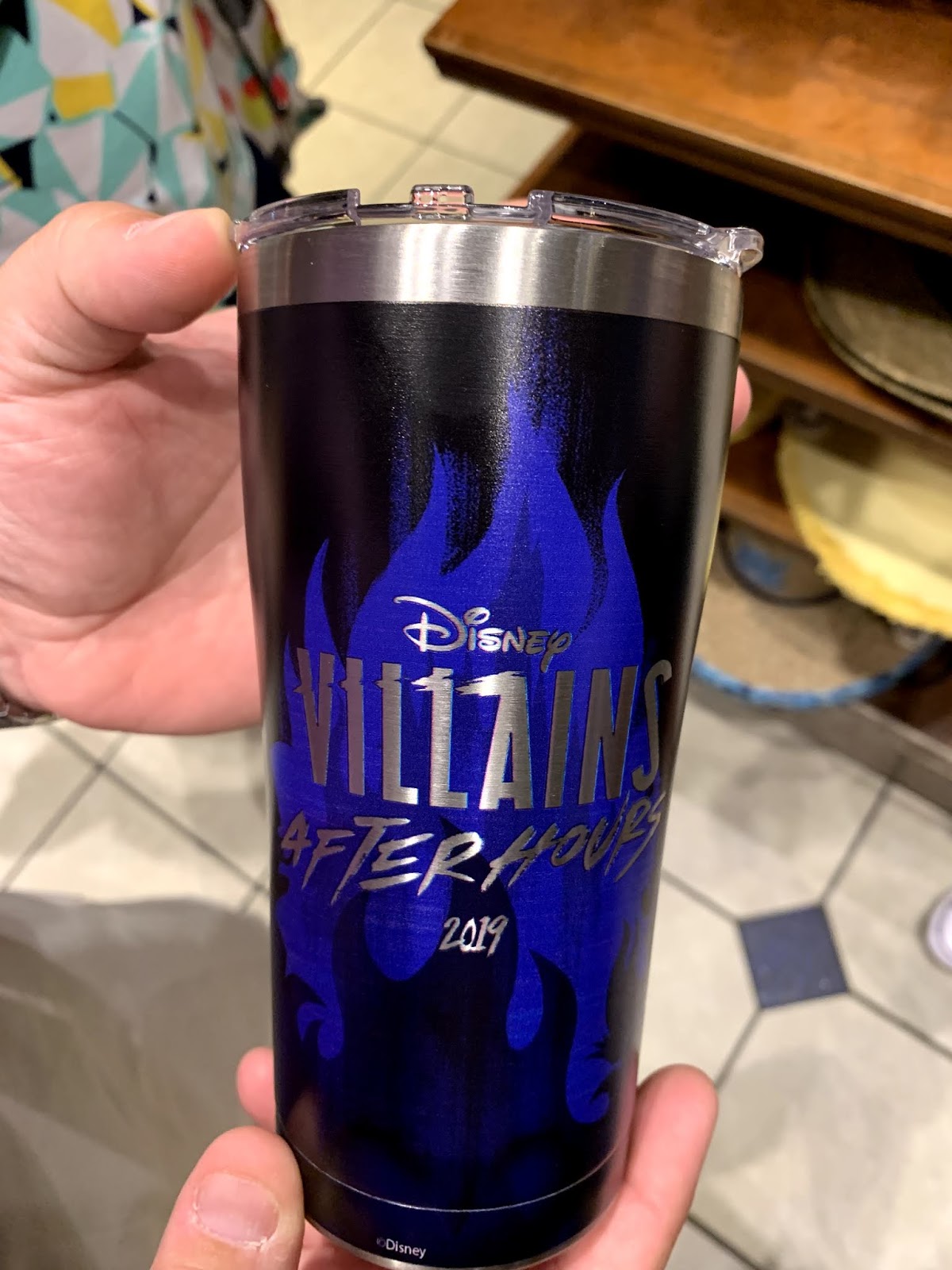 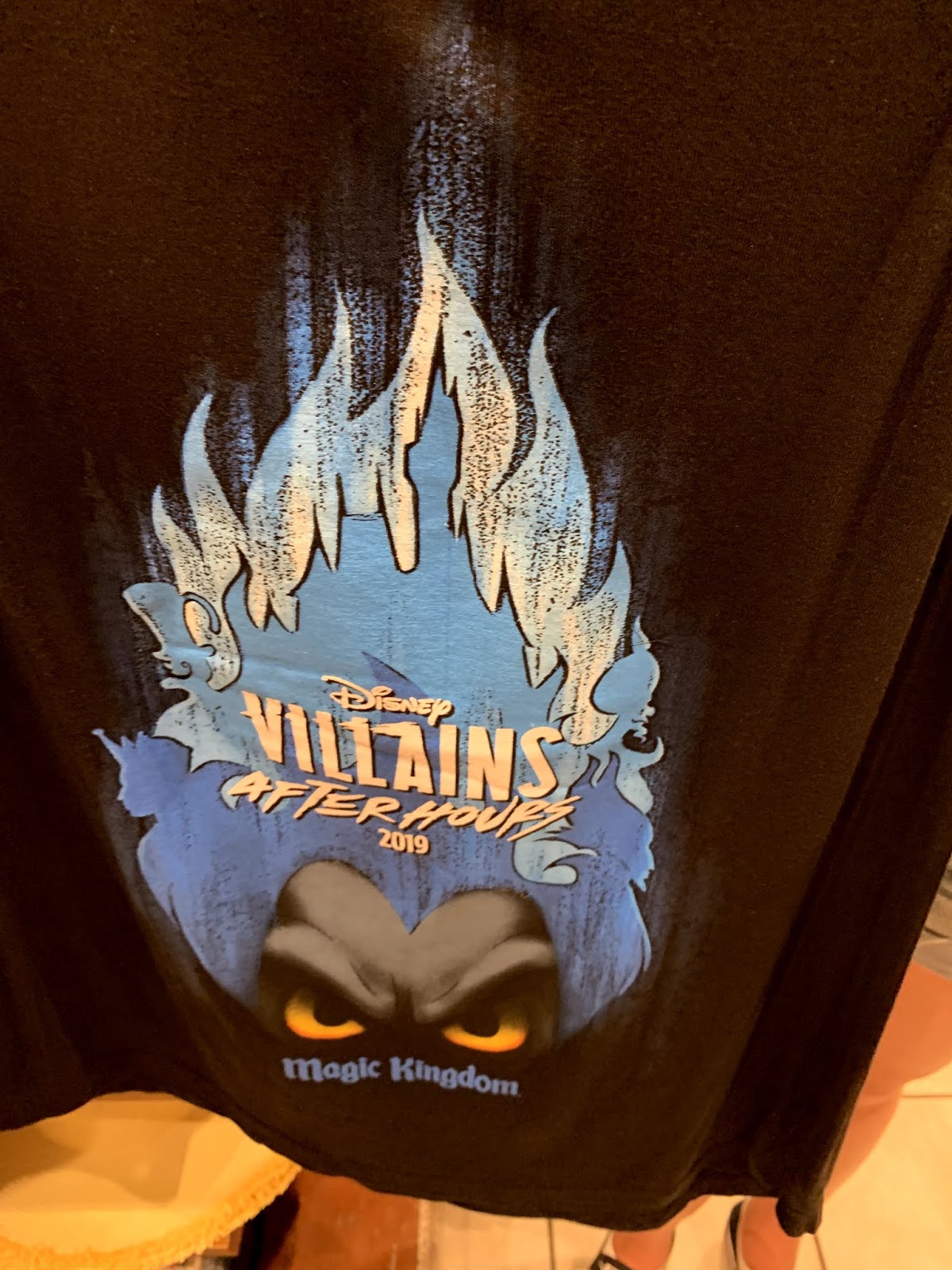 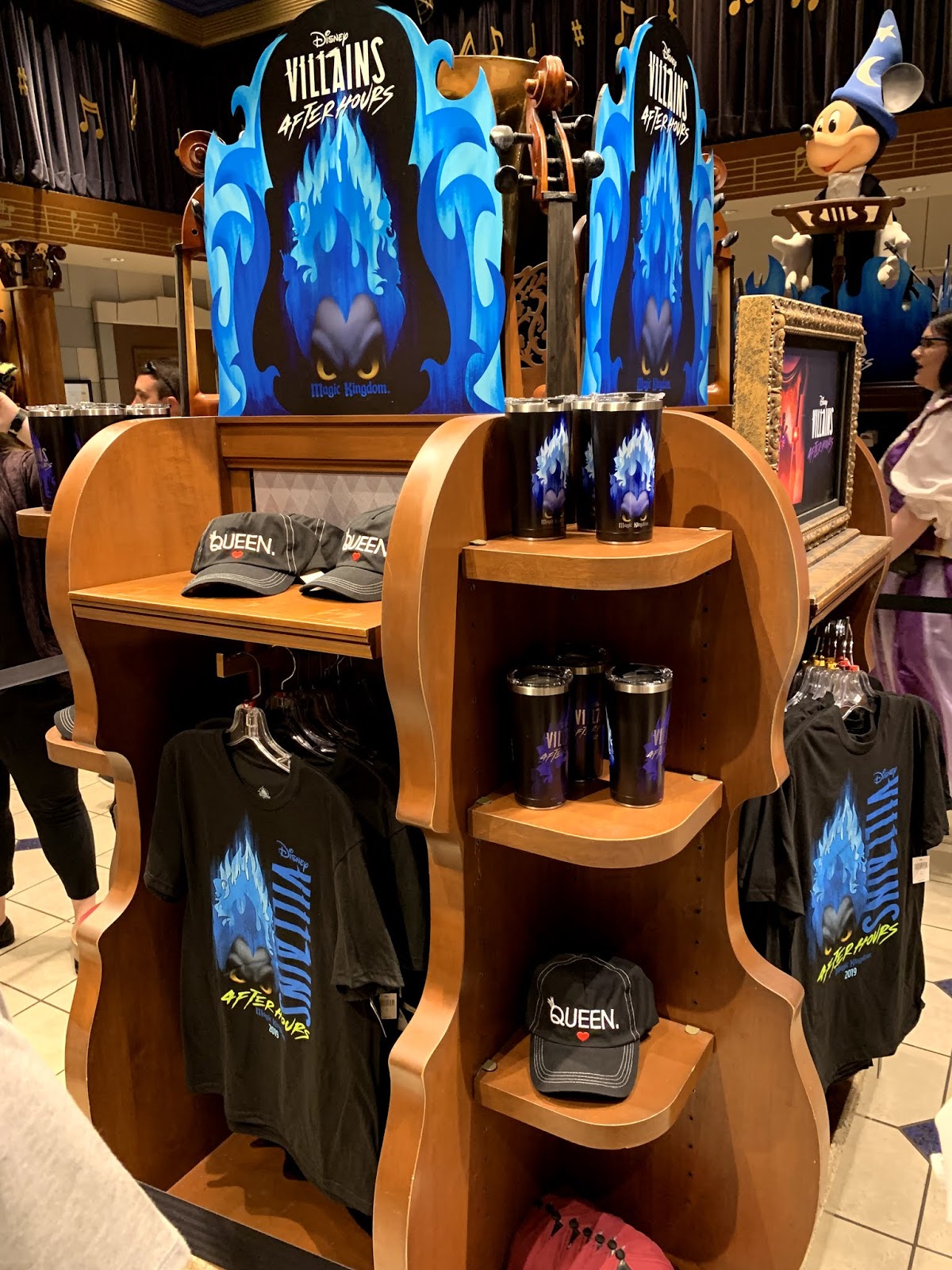 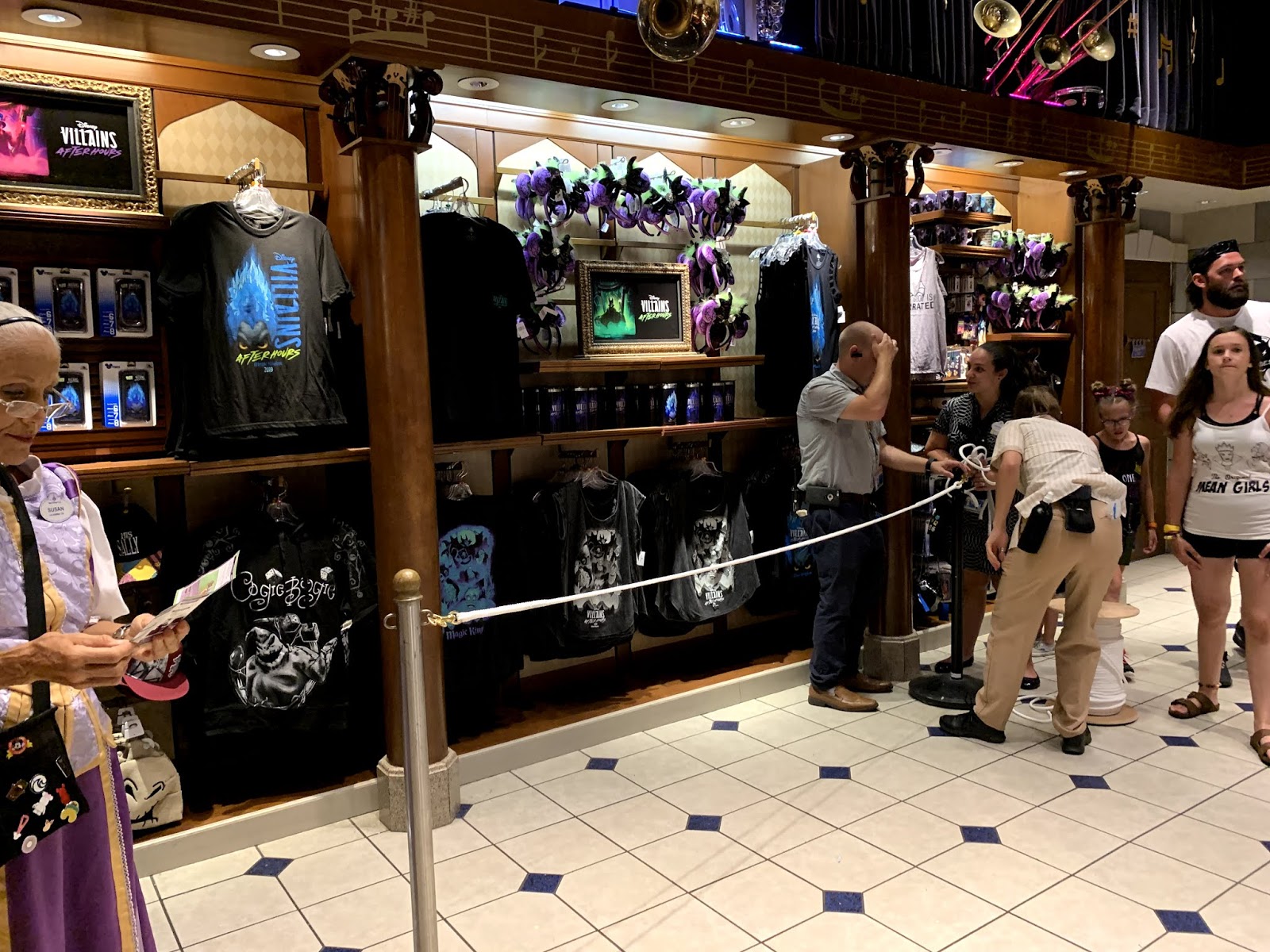 The specialty food, I admittedly ran out of time to try. Much of it looked spot on to the guide map handed out for the event and much of it looked amazing! A few stand out offerings were Yzma’s Llama Potion and Hades Temptation!

This aspect of the night I was really looking forward to as well. I don’t typically go to the Halloween parties so this was a nice surprise for me. The live character actors in Pirates were going above and beyond to create a memorable experience for guests both in the queue and on the attraction itself. Over at Space Mountain, the lights were completely out and a new soundtrack had debuted! We’re talking pitch black! No light tunnel, no lift lights, no accent lighting, no nothing! It was the scariest experience I’ve ever had on Space Mountain and I loved every minute of it. You couldn’t even see your hand in front of your face! We’ve laughed about riding it for hours today and I know, without a doubt, we’ll be talking about that overlay for years to come!

At the end of the night, a series of characters poked fun at the crowd and interacted with guests from afar as they were perched in the top of the Train Station as you left for the night. It was fitting end to an excellent experience and overall this is an event I highly recommend if you can swing the cost. It’s not perfect but I had a blast and I really and truly believe you’ll enjoy it if you take the time out of your vacation to make it happen.

Here’s the deal in regard to the characters. There are no meet and greets but I don’t see that as an issue. Truthfully, you wouldn’t have time to do anything else if there were meet and greets and basically every villain you want to see is interacting with you in some way either distantly or up close and personal in a show or even waving goodbye to you from the Main Street Station. It’s a far more uniform experience and you really can’t beat an entire lineup of villains rotating in and out of position literally interacting with you and other guests for moments on end!
While I know it was on everyones mind going into this, I do kind of get it and this is really a win-win situation for everyone when you really start to think about it!
As always, my judgement of Disney events hinges on one thing. It’s all about the memories the experience helps create with the people you care the most about! This event checked that box with authority and we’ll be checking out future events like this if Disney decides to make them more readily available.
Overall, the 5000 guest speculated crowd cap was a nice touch, and while this isn’t necessarily an event I’d recommend for kids, it was an incredible night to say the least! As always, if you have thoughts, concerns, questions, or even some tips of your own to share, don’t hesitate to reach out to us on Facebook or your favorite social media platform. Give us a follow while you’re there, and we’ll keep the conversation going in the future. We’re not the largest Disney community, but we’re one that’s here and one that listens. Thanks for reading and have a wonderful day wherever you are! 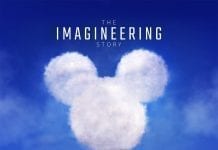